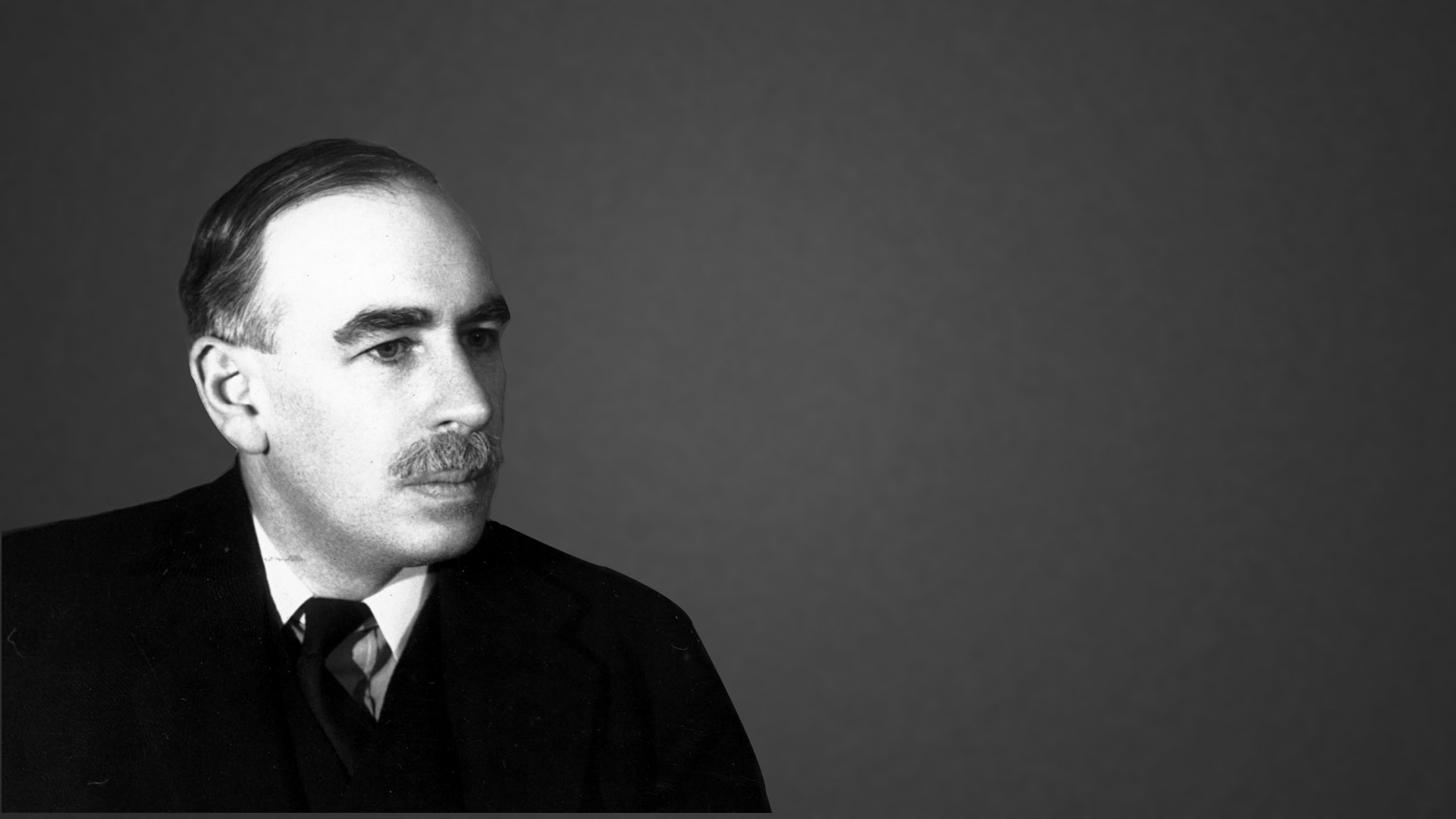 When we look for the watershed doctrines of modern capitalism, we quickly turn to Adam Smith’s The Wealth of Nations for the birth of capitalistic thought and to Joseph Schumpeter’s theory of “creative destruction.”

Other economists, such as David Ricardo, Thomas Malthus, John Stuart Mill, Alfred Marshall and Frederick Hayek, have also made important contributions to the economic system we know today. Yet few have influenced the social consequences of economic thought more than John Maynard Keynes. His position in this select group of thinkers is secure: his theories revised modern economic models and had a direct role in transforming Western society during the dark days of the Great Depression. Precisely when the world needed a brilliant contrarian, Keynes was presented a stage on which to perform—and perform he did.

The son of economist John Neville Keynes, John Maynard was born in 1883, the year Karl Marx died (the younger Keynes would become instrumental in confronting and confounding Marx’s theories of communism). Robert L. Heilbroner says of John Maynard in his Worldly Philosophers: “At age four and a half he was already puzzling out for himself the economic meaning of interest; at six he was wondering about how his brain worked; at seven his father found him a ‘thoroughly delightful companion.’” The privileged education that Eton and King’s College, Cambridge, had to offer was perhaps a given, therefore. Heilbroner points out that Keynes’s abilities were so prodigious that “it was as if the talents that would have sufficed half a dozen men were by happy accident crowded into one person.” He was also an imposing figure at six and a half feet (two meters) tall.

Keynes developed an early liking for the finer things of life, acquiring a taste for champagne and running in elite social circles. As a first-year student at King’s College, he was inducted into an exclusive secret society known as the Apostles, whose membership included Bertrand Russell, G.M. Trevelyan, Leonard Woolf, G.E. Moore and E.M. Forster. Several of them went on to help form the free-thinking Bloomsbury Group, an equally exclusive club of major artistic and literary figures of the day. Forster and Keynes were among its early members, as were Leonard and Virginia Woolf.

Biographer Robert Skidelsky remarks that Keynes came to regard himself as “an arbiter on every subject.” He was profoundly self-confident and seemed to excel at all he touched. Venturing into the perilous world of currency and commodity trading, he accumulated a £500,000 fortune and also established a brilliant record as an investor, managing a fund for King’s College from 1928 to 1945 and producing an average annual return of 13.2 percent despite the stock market crash of 1929 and the ensuing Great Depression.

The budding economist actually began his government career in India in 1906 as a minor public official. He had missed out on a coveted Treasury position by scoring second in the British civil service exam. But Keynes quickly became bored with India and his job, resigned, and went back to Cambridge. His years in India were not futile, however, as his sense of Indian affairs bore fruit in his first work, Indian Currency and Finance (1913). It was soon considered a masterpiece and landed the 29-year-old a Royal Commission to study the Indian currency problem.

Keynes later became a key figure in the Treasury Department and in 1919 took part in the World War I peace conference at Versailles. As a member of the British delegation, he sat in on discussions over German war reparations. Through his own calculations, Keynes knew that Germany could never pay the reparations and that their imposition would only impoverish that nation and create hostility toward France and England. He feared that the extreme punishment the Allies imposed would ruin the German economy and result in further conflict in Europe. His predictions were realized when Germany was beset by hyperinflation in 1923, leading to the rise of Adolf Hitler and the Nazi party. Keynes put his views in print shortly after Versailles in his treatise The Economic Consequences of the Peace, for which he received wide acclaim and national prominence.

In 1923 the now-celebrated economist took the international gold standard to task in his Tract on Monetary Reform. His later work, Treatise on Money (1930), attempted to explain how the whole economy worked and the interplay between savings and investment. Keynes contended that savings decisions and investment decisions were made by different groups of individuals. Steven Pressman, in Fifty Major Economists, summarizes Keynes’s argument: “It was the responsibility of the central bank to keep these variables equal to one another” in order to prevent inflation and recession.

Brilliant as it was, the work did not explain the cause of the Great Depression, which developed almost contemporaneously with his Treatise on Money. As the Depression deepened, experts were at a loss to explain why the economies of the world did not recover, as had been the case in prior recessions. They assumed that savings and investment would, in time, always reach equilibrium, resulting in an economic upturn. The facts were different in the 1930s. The economy was not recovering; it was getting worse, and no one knew why.

In the midst of the Great Depression Keynes wrote a book that changed economic thought and stood classical economic theory on its head. Published in 1936, The General Theory of Employment, Interest and Money came to a startling conclusion: there is no “automatic safety mechanism” in the economy that will result in a savings and investment equilibrium and cause an economic rebound. The economy could hit bottom and stay there. In a depression, the economy might not cure itself and could remain stagnant—indefinitely.

When an economy is in a depression, conventional economic rules regarding savings and investment do not function as they might in a normal economic cycle. Savings are a luxury when people have money in their pockets. When people are unemployed, not only do they not save, they sell assets and spend the money they saved earlier. The unemployed exert little or no positive influence on the economy due to their lack of income. The only solution in this situation is to increase employment, thereby increasing income and consumption. Keynes pointed out that if business cannot do so, then the government must intervene.

He introduced the concept of aggregate demand—the theory that an economy’s output and growth are largely determined by total demand, both private and public. He believed that there are times when private investment is inadequate, requiring government intervention to stabilize it. The government should therefore borrow money (run budget deficits) in order to fund public investments such as new roads, bridges and other public works. However, Keynes also said that the government should stop its borrowing and reduce public spending when consumer and business confidence are restored. In other words, deficit spending is to be a short-term measure to bring the economy back to a natural equilibrium. He never advocated it as a long-term policy.

Keynes was a key architect of the postwar system of fixed exchange rates negotiated at a conference at Bretton Woods, New Hampshire, in 1944 (both the World Bank and the International Monetary Fund had their genesis at the conference). This system required that all nations peg their currencies to an ounce of gold and maintain that value. Since all currencies would be tied to gold, their values would all be tied to each other. The fixed-exchange-rate system lasted until August 1971, when U.S. president Richard Nixon ended the convertibility of dollars into gold and substituted a flexible, or variable, exchange rate, where the dollar would float relative to an ounce of gold.

After World War II and the Bretton Woods Conference, Keynes was at his zenith. He had been elevated to the peerage in 1942, becoming Lord Keynes, Baron of Tilton, and additional appointments and honors flowed in. The demands of his responsibilities weighed heavily on him, however, taking a toll on his health. In 1946 he returned to Sussex to rest and prepare for his resumption of teaching at Cambridge. But he suffered a heart attack (perhaps a series of them) and died in his home.

John Maynard Keynes’s position in the pantheon of economic thought is secure. Though his ideas were initially considered heretical, threatening the very heart of classical economic thought, Keynesian economics was widely accepted in its time. Many of his ideas have been superseded and are even derided today, yet few economists can claim to have had such a profound effect on the development of “the dismal science” in the 20th century or to have been directly responsible for returning the world economy to prosperity from the depths of depression. Keynes performed his role on the international stage at a crucial time in world history, prompting Pressman to dub him “the pragmatic savior of capitalism.”