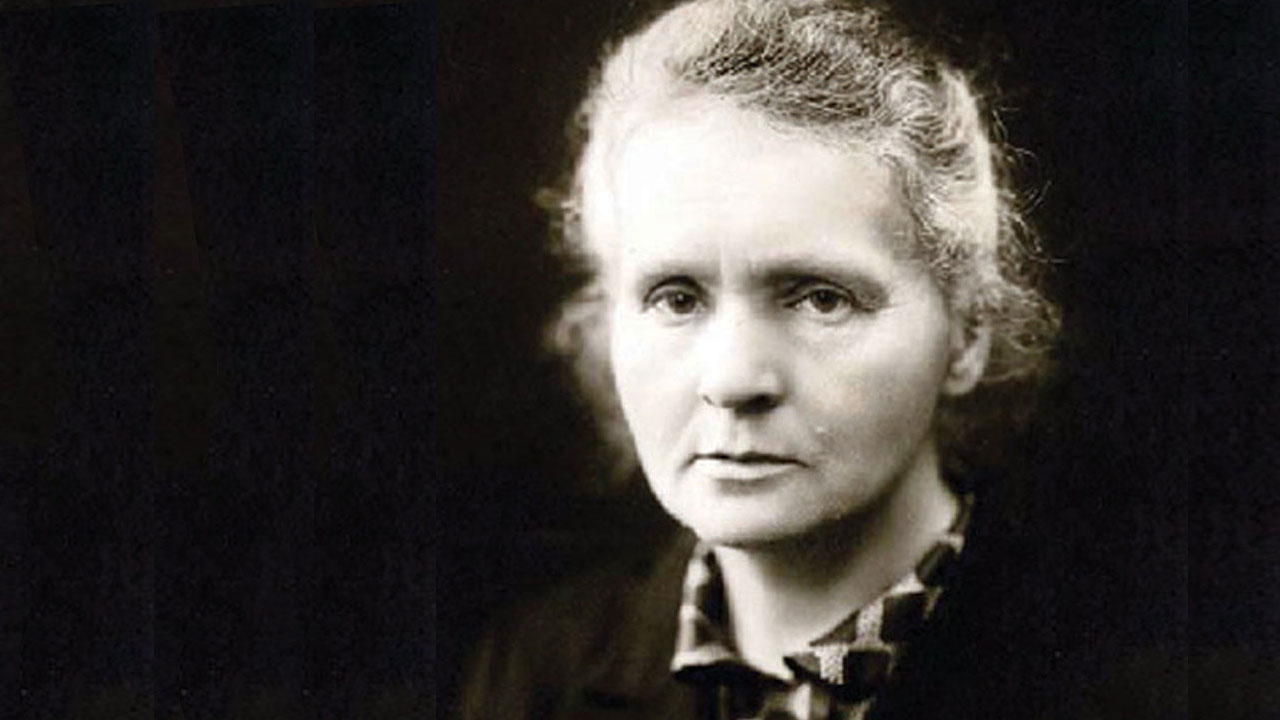 Such were the times into which Vladislav and Bronislava Sklodowski’s fifth child was born in Warsaw, Poland. They affectionately nicknamed her Manya—a pet form of Maria—though affection appears to have been a scarce commodity in the Poland of 1867. Under the ever oppressive eye of Russian overseers, the infant’s father, a physics teacher, was closely watched, as were all the intelligentsia.

In time, deeming it unsuitable for the Polish masses, the Russian supervisors began removing science from the school curriculum. As it was no longer appropriate for Professor Sklodowski to bring physics equipment from home for his classes, it remained in his study: barometers, shiny tubes and objects in glass cabinets. Even as a youngster, the curious Manya was fascinated by these baubles.

Soon demoted from his position at the school, and with his wages and living allowance reduced as a result, Sklodowski attempted to ensure a continued income by investing his savings in a brother-in-law’s business. He lost it all. The family was forced to move several times and eventually took in boarders—boys whom the professor fed, lodged and taught.

Along with those boys came typhus, and in 1876 Manya’s eldest sister died. Her mother died two years later from chronic tuberculosis. Only then did 10-year-old Manya understand why her mother had never once kissed her.

As a teenager Manya would often meet a girlfriend on the way to school. In the courtyard of the building where her friend lived stood a brass lion with a ring in its mouth; if her friend was not there waiting, Manya would lift the ring up over the lion’s head as a signal that she had gone on ahead. Her life would play out in the same fashion—moving ahead of others and blazing a trail—a trail that eventually led to the atomic bomb.

Today we know this child not as Manya Sklodowska but as Nobel laureate Marie Curie. How little Manya became the first woman to receive the Nobel Prize in Physics, as well as the first person to earn a second Nobel Prize, is a fascinating story. Though her life of tragedy, sacrifice and diligence is extraordinary, the result of her scientific work radiates great irony.

In 1888, Manya’s father, now retired on a meager pension, accepted the cheerless job of reform school director. With it came an income that could be set aside for his youngest daughter’s formal education. But Manya, now 21, had lost interest in education. For the past three years she had lived as a governess in the country, earning money to support her older sister’s medical education in Paris. Moving back to Warsaw, however, she began to associate with the so-called floating university, a free-thinking youth underground.

“You cannot hope to build a better world without improving the individuals.”

Girded with the patriotic hope of future Polish independence, Manya would secretly congregate with the youth of Russian Warsaw. “I still believe that the ideas which inspired us then are the only way to real social progress,” she later wrote. “You cannot hope to build a better world without improving the individuals. To that end each of us must work for his own improvement, and at the same time share a general responsibility for all humanity, our particular duty being to aid those to whom we think we can be most useful.”

Behind the clandestine front of the Museum of Industry and Agriculture, Manya was for the first time able to participate in scientific work at a makeshift laboratory. “I tried out various experiments described in treatises on physics and chemistry, and the results were sometimes unexpected,” she wrote. “At times I would be encouraged by a little unhoped-for success, at others I would be in the deepest despair because of accidents and failures resulting from my inexperience. But on the whole, though I was taught that the way of progress is neither swift nor easy, this first trial confirmed in me the taste for experimental research in the fields of physics and chemistry.”

This wakening taste for research sparked her latent curiosity and propelled her to a life of science. In the autumn of 1891, the 24-year-old departed Poland on a fourth-class train ticket to Paris, and by 1894 she had earned degrees in physics and mathematics at the Sorbonne. She would soon become head of the physics laboratory there and go on to earn her doctorate in 1903.

While seeking to find a workroom in which to carry out research in magnetism, Manya, called Marie by her French colleagues, met Pierre Curie, a professor at the School of Physics and Chemistry. His primary interest was crystal structure, but he found Marie fascinating as a scientist, someone totally driven and committed to her work. On a research paper he sent to her, he annotated: “To Mlle Sklodovska, with the respect and friendship of the author, P. Curie.” According to Eve Curie’s 1937 biography of her mother, Pierre considered Marie a girl who “had the character and gifts of a great man”: genius, devotion, courage and nobility.

When Marie returned to Poland for the summer of 1894, Pierre wrote constantly, wooing her back to Paris with a confused amalgam of je t’aime and scientific respect. “Your picture pleases me enormously. How kind of you to send it to me! I thank you with all my heart. . . . I want very much for us to become at least inseparable friends. Don’t you agree?”

Marie later wrote that “for Pierre Curie there was only one way of looking at the future. He had dedicated his life to his dream of science: he felt the need of a companion who could live his dream with him.” She returned to Paris in October and married Pierre in July 1895. Daughters Irene and Eve would be born in 1897 and 1904 respectively.

Meanwhile in 1896, Henri Becquerel reported discovering radiative emissions from uranium salts. Using an apparatus designed by Pierre, Marie began to analyze and quantify these “Becquerel rays.” She discovered that the phenomenon, which she called radioactivity, was a characteristic of materials beyond uranium and thorium; indeed, it was a property of matter related to what we now know as nuclear change and the fission or transmutation of atoms. These initial discoveries edged open the door to the physics of the atom itself.

For the next two years Marie worked at refining pitchblende, a uranium ore, into its radioactive constituents. Tons of ore was assayed and ground by hand in the rustic laboratory shed at the School of Physics. “One of our joys was to go into our workroom at night; we then perceived on all sides the feebly luminous silhouettes of the bottles or capsules containing our products. It was really a lovely sight and one always new to us. The glowing tubes looked like faint, fairy lights.”

“The discovery of radioactive phenomena dates back only 15 years. Radioactivity is thus a very young science. It is a child that I saw being born and that I helped, with all my strength, to raise. The child grew; it became beautiful.”

In 1898 the Curies published their first account of a new radioactive substance. They named the element polonium in honor of Poland. Soon after, they isolated a second element, radium, a million times more radioactive than Becquerel’s original salts.

For their pioneering work in radioactivity, Becquerel and the Curies were awarded the 1903 Nobel Prize in Physics. But in his acceptance speech, Pierre warned that because radiation had the power to harm, “in criminal hands radium could become very dangerous, and here one can ask if humanity is at an advantage in knowing nature’s secrets, if it is mature enough to make use of them, or if this knowledge might not be harmful to it.” He concluded the speech by citing Alfred Nobel himself: “The example of the discoveries of Nobel is characteristic, as powerful explosives have enabled man to do wonderful work. They are also a terrible means of destruction in the hands of great criminals who are leading the peoples towards war. I am one of those who believe with Nobel that mankind will derive more good than harm from the new discoveries.”

The Royal Society of London followed up with one of its own highest honors, the Davy Medal. But to the Curies such recognition was of little consequence. Pierre handed the medallion off to his young daughter (“Irene adores her big new penny”) while Marie shunned the publicity. Eve later wrote, “To look at this tall, ungainly man, carelessly dressed, leading his bicycle along some hollow road in Brittany, and the young woman who accompanied him, accoutered like a peasant girl, who could imagine them to be laureates of the Nobel Prize?” Even simple recognition seemed overwhelming to Marie, as Eve recalled: “I should have liked to feel that such prodigious success, a scientific reputation without precedent for a woman, had brought my mother some moments of happiness. . . . It was a childish hope. Marie, promoted to the rank of ‘the celebrated Mme Curie,’ was still to be happy at times, but only in the silence of her laboratory or the intimacy of her home. Day after day, she made herself dimmer, more effaced, more anonymous, in order to escape from those who would have dragged her onto the stage, to avoid being the ‘star’ in whom she could never have recognized herself.”

Over the next few years, already fighting illness and fatigue now known to have been caused by the radiation exposure inherent in her work, Marie went on to purify one decigram (0.1 g) of radium. This was enough to confirm that it was indeed an element and could be identified by weight and later by half-life. In recognition of this work, which in essence created the field of nuclear chemistry, Marie would become the first person (and to date the only woman) to win a second Nobel Prize, this time the 1911 prize in chemistry.

In the interim, a radium “industry” had been born as scientists around the world sought to work with the substance. For example, the first radiation therapy, called curiethérapie in France, miraculously destroyed tumors when infected skin was exposed to radium. In addition to sparking the advent of radiology, radium was also used to make dials glow and even to power a rudimentary atomic clock.

Having created the processes of purification, the Curies could have reaped great wealth from their work. Humbly and true to form, they determined to publish their research completely without patents or the kinds of restrictions so prevalent today. “If our discovery has a commercial future,” they said, “that is an accident by which we must not profit.” It soon became apparent that the radiation resulted from atomic decay, the breakdown of atoms. Atomic energy was now at hand.

In Eve’s biography, she relates the philosophy of scientific dedication learned from her parents; the Curie family continued in that service and science orientation. Irene, with her husband Fredrick Joliot, received the Nobel Prize in Chemistry in 1935 for their creation of radioactive elements. And as director of the United Nations Children’s Fund (UNICEF), Eve’s husband H.R. Labouisse received the Nobel Peace Prize in 1965. But Marie and Pierre would not witness these honors.

In 1906, Pierre Curie slipped on the wet pavement after a Parisian spring rain and fell under the wheels of a carriage carrying military uniforms. His forehead crushed, Pierre died instantly. Marie was devastated: “They filled the grave and put sheaves of flowers on it. Everything is over, Pierre is sleeping his last sleep beneath the earth; it is the end of everything, everything, everything.”

Marie soldiered on for another 18 years, finally succumbing to radiation-induced leukemia in 1934. Eleven years later, two atomic bombs fell on Japan; the triggering devices were made possible by polonium—the element she and Pierre had discovered and by which she had hoped to bring honor to her homeland.