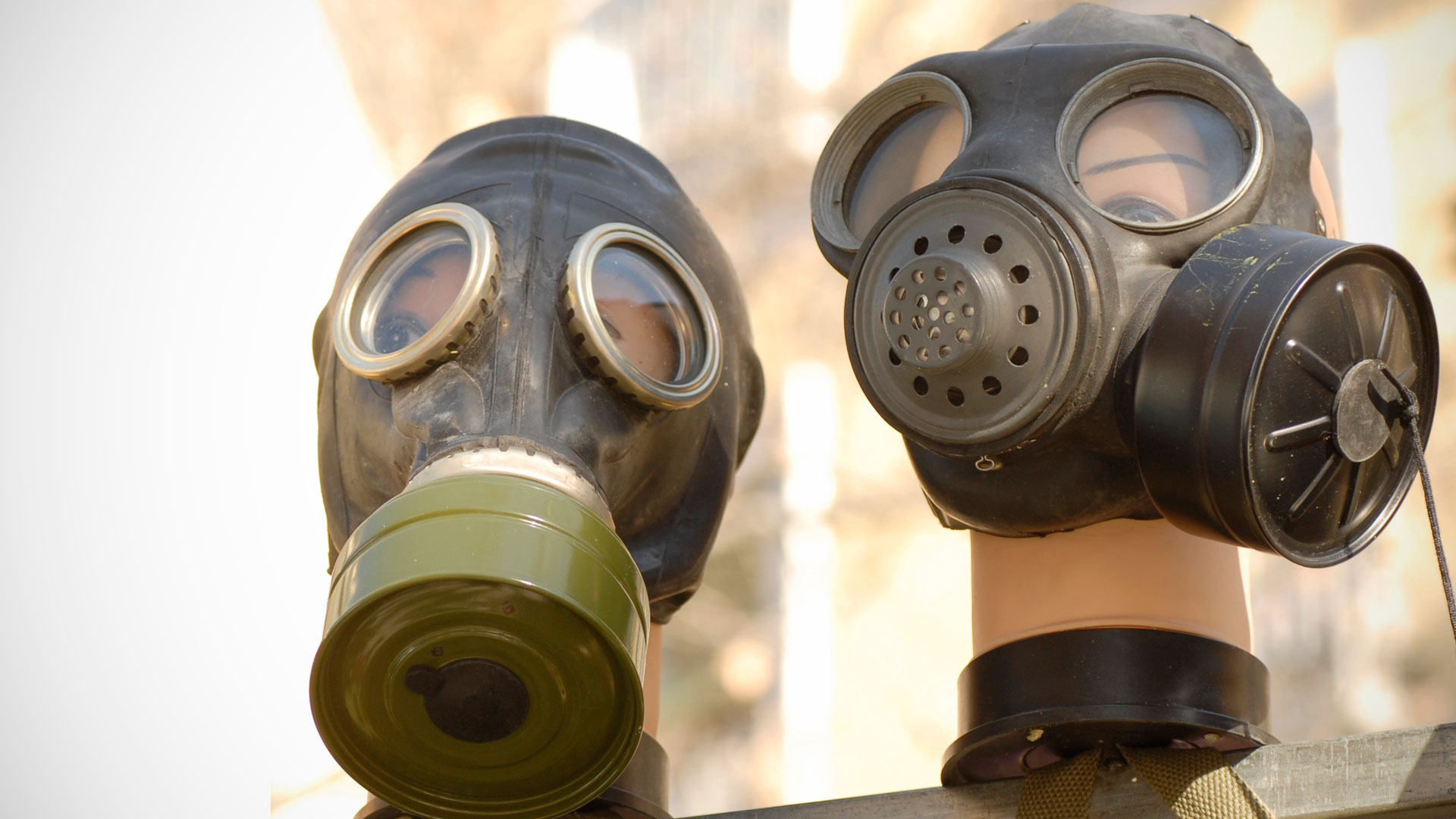 What do you think of when you see the name “MAD”? If you’re a baby boomer, you may come up with a mental image of the offbeat magazine whose banner child, Afred E. Neuman, typically flashes his “What, me worry?” grin from the cover.

The 1950s spawned another MAD, however, and it lends a certain irony to Alfred E. Neuman’s perennial question. As the back cover of one issue of the magazine showed, even the imperturbable Neuman worried about what would happen if nuclear power were allowed to run amok. Indeed, thanks to a military strategy known as Mutual Assured Destruction—the MAD doctrine—the whole world had plenty to worry about.

Originally touted as a means to deter the Soviet Union from advancing on Europe, MAD designers believed a systematic plan to counter the USSR’s superior conventional forces with nuclear force would prevent an invasion. Military experts at the time theorized that the scenario of all-out nuclear war between the United States and the Soviets would lead to a stalemate and thus deterrence. And as history played out over the next 30 years, fear of mutual destruction did produce military stalemate.

In that sense, MAD worked. But as MAD magazine back-page fold-ins demonstrated, a pleasant neighborhood scene could be converted to a wasteland under a mushroom cloud in an instant. Nuclear annihilation was for decades a mere 30-minute ICBM flight away. This naturally took its psychological toll.

The MAD plan also took a physical toll, however, and it affects us still today. Incidents of devastating nuclear pollution are only now being revealed, and the resulting loss of life has been as staggering as in many wars.

In the past few years, reports have begun to emerge from Kazakhstan about the plight of millions of people who have been contaminated by soviet nuclear testing over the past 50 years. The medical crisis that the region is experiencing amounts to nothing short of a catastrophe.

Kazakhstan occupies a vast territory between Russia and China and is a former soviet republic. In 1949, one of the largest nuclear test sites in the world was established in its Semipalatinsk region. Since then, close to 500 nuclear tests have been conducted. The consequences of these explosions are no less devastating than those of Chernobyl—or Hiroshima and Nagasaki—with perhaps as many as 1.6 million people becoming victims.

Boris Gusev of the Institute of Radioactive Medicine told a BBC reporter: “The contamination spread over thousands of kilometers. There’s nowhere else like this in the world. Japan? Nevada? Forget it! It’s equivalent to 1,000 times the impact of the Hiroshima bomb.” The doctor added, “This is a unique situation and we need help.”

Authorities often ordered the local population to stand outside and watch the mushroom clouds ascend into the sky.

More than 100 of the early tests were conducted above ground, but the local population was not warned of the danger of exposure; in fact, the authorities often ordered them to stand outside and watch the mushroom clouds ascend into the sky. The people didn’t know that because of the need for data on the effects of radiation on humans, they were actually part of the experiment.

The enormity of the story is only now unfolding because of the time it takes for radiation exposure to develop into various cancers. An epidemic proportion of old people are currently dying of that disease, and the local hospitals are stretched to take care of them. Some of the doctors have not been paid for months, and supplies, medicine and equipment to deal with the tragedy are scarce.

Doctors are very troubled by the lasting effects of the contamination. Deformities among newborn children are increasingly common. From every village in the region come reports of babies and children with terrible disfigurements, stunted growth, extra fingers and toes, blindness or hideous tumors. Many distraught parents are simply abandoning their newborn offspring, bringing even more stress on the medical infrastructure.

The soviet nuclear program is gone from Kazakhstan now, as is the statue of Lenin that used to stand in the Semipalatinsk town center. But the people will remember for a long time that the soviet regime was there.

Semipalatinsk isn’t alone. Fifty miles north of Chelyabinsk, Russia, on the western edge of Siberia, lies an industrial complex. It was the Soviet Union’s primary nuclear weapons production facility from 1946 until 1990. Its name, Mayak, means “lighthouse”—ironic, considering that officially it did not exist.

Three nuclear disasters took place at Mayak. Taken together, they were 100 times worse than the disaster at Chernobyl, say some reports. According to investigative reporter Mark Hertsgaard, author of Earth Odyssey (1999), both the KGB and the CIA kept these events secret from the world, and even from the Russian people.

Thomas Cochran, a nuclear physicist at the Natural Resources Defense Council in Washington, D.C., called Mayak “the most polluted spot on earth.” And a report commissioned by Mikhail Gorbachev called Chelyabinsk the cancer capital of the entire Soviet Union. Nuclear contamination was only the latest pollution to poison an area already heavily polluted by outmoded industrial facilities.

The first of the three disasters was a result of deliberate policy. From 1949 to 1956, 76 million cubic meters of liquid radioactive waste was systematically dumped into the nearby Techa River. People in the 24 villages that lined the river were not told of the dangers of drinking its water until four years after contamination began. As a result, tens of thousands received doses of radiation four times greater than those that were subsequently received at Chernobyl. Average individual doses for the 28,000 people most acutely exposed were 57 times greater, wrote Hertsgaard.

The next tragedy took place in 1957 when a nuclear waste storage tank at Mayak exploded, spewing about 80 metric tons of waste into the sky and irradiating more than a quarter of a million people. Ninety percent of the radioactive debris fell straight back to earth, but the remainder severely contaminated the air, water and soil in the entire Chelyabinsk region.

In 1967 a third disaster occurred, but its cause goes back to 1951 when Mayak officials, realizing they should no longer use the Techa River to dump waste, started pouring it into Lake Karachay. Drought had severely reduced the water level in the lake by 1967, leaving a layer of radioactive silt on the exposed lakebed. When unusually heavy winds blew through the area, the contaminated dust was dispersed over thousands of square miles, exposing nearly half a million people to high levels of radiation.

Until 1989, officials continued to deny that these disasters had taken place, and it will never be known how many people have died as a direct result. As with Chernobyl, the aftereffects of radiation sickness will blight and kill successive generations for years after exposure to the pollution.

What Have We Done?

The 20th century was unique for its nuclear development. Incredible technological progress of all kinds brought unparalleled benefits to the human race. But throughout the developed world the dark side of our technological advances brought on horrors that previous generations could never have imagined. The 21st century has inherited a legacy of intractable problems that largely defy solutions—such as those at Semipalatinsk and Mayak. How is all that nuclear pollution ever going to be cleaned up?

Former soviet president Gorbachev in 1993 created Green Cross International, in part to address such problems as nuclear waste and contaminated landscapes. Nevertheless, nations will long suffer the radioactive legacy that was created in the name of peace. In an effort to preclude war, governments have killed their own citizens. And since radioisotopes travel the planet within its atmosphere, they have contaminated, to one degree or another, all life on Earth.

Global economic success over the past few years may have given the world a false sense of security. In this new millennium, science could well create technologies that would dwarf the destructive aspects of nuclear development.

Alfred E. Neuman is probably resting easier now that the Cold War has ended, and with it the MAD doctrine of nuclear stalemate. But nuclear accidents remain a distinct possibility; and nuclear proliferation, along with the growing prospect of nuclear terrorism, still casts a pall over human consciousness. Remembering what happened in places like Kazakhstan and Chelyabinsk should give us pause for thought. What have we done to ourselves?

“What, me worry?” Actually, a bit of angst may motivate people to make wiser decisions with regard to such powerful technologies. But will it be enough?