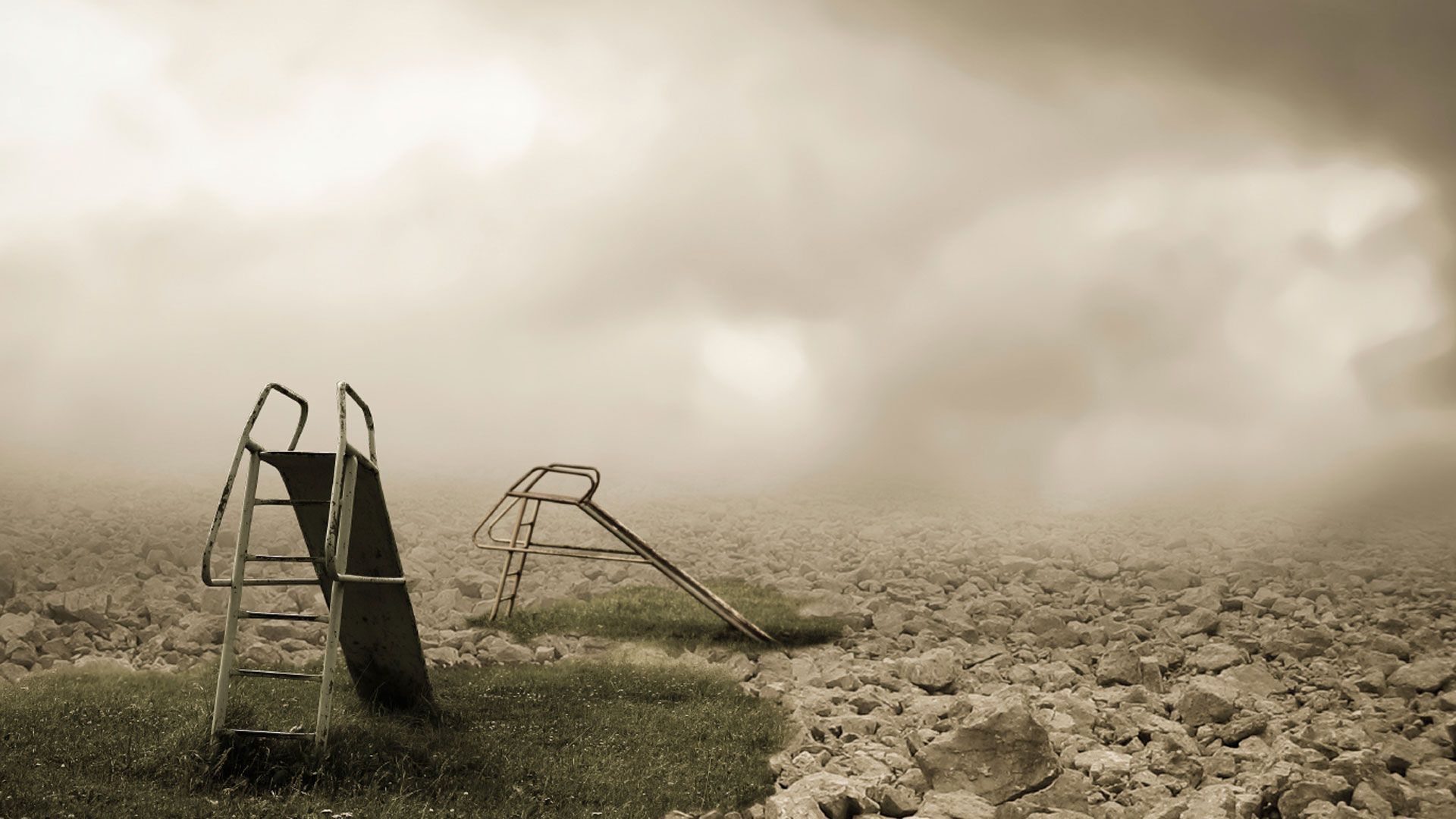 Chernobyl—once just a small, relatively unknown town on the Pripyat River in northern Ukraine, but since 1986 a byword for nuclear catastrophe.

Now, 15 years later, perhaps Chernobyl can retire from immediate public awareness, because on December 15, 2000, the plant—which was still operating one of its four reactors—was permanently shut down.

But for millions of people, the unspeakable tragedy lives on.

In 1996 I received a charity circular stating that 800,000 children were suffering an increasing incidence of serious disease and that the hospitals were totally depleted—without even an aspirin. My first reaction was one of disbelief. I was determined to verify that claim with a personal visit to the area. This report is based on observations and personal conversations that took place during three ensuing trips.

Before the disaster, Chernobyl’s Number Four reactor core contained 170 tons of uranium. The explosion on April 26, 1986, scattered 70 tons of that uranium locally; 50 tons ascended high into the atmosphere as a plume of radio-active dust; and 50 tons disappeared into the ground.

Moscow was informed that the reactor core was intact. But in truth, Number Four was empty.

Tass, the soviet news agency, remained silent about the accident for 10 days. The first announcement appeared in the newspaper Pravda on May 6. The short article, one third of the way down on the right-hand side of the page, expressed thanks for the offers of help but added that it was not needed and that the magnitude of the accident had been exaggerated out of all proportion. Trust us, it said.

The next article on the subject came on May 11, 15 days after the explosion. At the bottom of page three, it emphasized that the situation was stabilizing. The main news that day was about spring planting.

The local population concluded that the activities of the helicopters and fire engines around the power plant were part of a military exercise (they had no way of knowing that all the pilots would be dead within one month). Children continued playing in the streets and fields. But when a senior doctor measured the radioactivity around the children, he was horrified to record levels beyond the ability of the counter to measure. He informed the City Fathers: they simply dismissed him from his appointment with the words, “We’ll decide how much the children can take.”

No one thought to tell the public that children needed potassium iodide tablets to protect their thyroids. It was only after great pressure from the doctors that the authorities finally issued the tablets to block the uptake of radioactive iodine. By then it was May 17—three weeks after the accident. For maximum effectiveness, however, the thyroid must be blocked within five hours of exposure.

Clinic staff report that only one percent of children examined can be described as healthy.

The effects of such negligence have become apparent over the years: One of the huge polyclinics in Chernigev, 40 miles east of Chernobyl, examines 33,000 children each year. Clinic staff report that only one percent of children examined can be described as healthy. Babies have a 97 percent chance of being born with some abnormality if even one parent was radiated. Boys entering puberty are often impotent, with deformed spermatozoa and poor physique. Asthma, epilepsy, neurosis and psychosis are also common. Asthma alone affects 80 percent of the children—and it’s all managed without the therapy that the Western world takes for granted.

Scientists have calculated that the rest of Europe has a mortality increase of 1,000 cancer patients each year as a result of the fallout. Chernigev has the highest incidence of thyroid cancer in the world, with an unknown number of additional cases in rural districts, where the collection of statistics is an unaffordable luxury.

The Faces of Tragedy

Young patients who require long-term treatment are referred to the Chernigev Center of Medical Social Rehabilitation of Disabled Children. When I first visited, the rooms were empty and featured bare floorboards. Funds for the equipping and staffing of the center have been dependent on international donations, and it functions from week to week with no reserves. Each child costs £25 (US$40) per week to treat. As the center’s name suggests, its aim is to rehabilitate children not only medically but also socially.

The staff begins by taking clinical histories of all the children, as well as a blood sample to determine their immune status. The suppression of white cells by radiation is similar to the effect of the human immuno-deficiency virus (HIV): all the youngsters are immune disrupted and prone to infection and malignancies.

I sat in with local physicians as they saw children in the out-patient clinic. It was a heartrending experience.

Thirteen-year-old Olga came in for a follow-up visit. She had previously fallen off her bicycle and developed abdominal pain. During surgery, the doctors had found that a friable malignant tumor of the pancreas had ruptured. They excised the tumor, but Olga did not receive radiotherapy, chemotherapy, anti-biotics or vitamins: the doctors had none to give. According to her medical chart, the abdominal incision discharged for six months. At the time of writing, Olga’s outlook remains uncertain.

Nine-year-old Vitaly was 12 weeks in utero and his mother one mile from the nuclear power plant at the time of the explosion. Intense radiation passed through his developing brain and destroyed the motor cells that should have given rise to nerves extending into his limbs. With no nerves, he had no muscle development. His hands were distorted and useless, and he was paralyzed.

Twelve-year-old Lena came in next, accompanied by her grandmother (her mother had committed suicide a year earlier). Doctors had previously found a lump in her thyroid to be malignant, so they had sent her to Kiev to have her thyroid removed. Now dependent for her life on thyroid replacement tablets, Lena came back to see the doctors at the polyclinic. But they had only one month’s supply to give her, with no prospect of more. Understandably, the child was easily distressed and tearful.

Eleven-year-old Uri was in Chernigev during the accident. Although doctors had already removed his cancerous thyroid, they now found that the cancer had spread to the right side of his neck.

Uri isn’t alone. Seventy percent of thyroid cancers in children have already spread beyond the confines of the thyroid when they are operated on. At present, the city hospitals are performing many thyroid cancer operations each week. And most rural inhabitants never even come forward for thyroid examination.

A tour of local district hospitals confirmed that they are indeed depleted. Random opening of pharmacy drawers revealed that they were empty; equipment was antiquated—yet the floors and corridors gleamed with polish. The doctors stood in a row, the seriousness of their plight self-evident. Please help us, they asked.

The doctors stood in a row, the seriousness of their plight self-evident. Please help us, they asked.

In a neonatal ward, a woman doctor asked not to be photographed with the babies as she was so ashamed; they were in swaddling rags. Babies are breast-fed by anemic mothers, and there is no infant feed in reserve.

Because of the severe shortage of medical supplies, the doctors are forced to come up with alternative remedies. At the clinic, for instance, they divide the asthmatic children into two groups: mild and severe. They can offer no bronchodilators or steroids. Instead, the mild asthmatics sit in groups of three around a nebulizer and inhale oil of eucalyptus for 20 minutes a day over a period of seven days. The children do seem to derive some benefit from this simple treatment.

Severe asthmatics, however, require a somewhat more elaborate approach. Researchers found that miners in the Carpathian salt mines do not suffer from asthma. Accordingly, the director of the polyclinic has simulated the atmosphere of a salt mine for severe asthmatics. Desiccated salt is inserted into a mill that reduces the crystals to dust. A machine then blows the dust into a small room where the children inhale the salt fog for 20 minutes a day for three weeks. The reported results are quite impressive.

In the absence of therapeutics and equipment, it is evident that the doctors, physiotherapists, psychologists and nurses also provide another therapy: a shoulder to cry on and an ear to listen—therapies of considerable value that are often sadly lacking in Western medicine.

After lunch, all the children have a rest for one hour, followed by a visit to the dental clinic—which is without local anesthetic or filling materials. The rest of the afternoon is occupied by attending the physiotherapy, psychology and play clinics. Children learn to socialize together and are taught physical exercises and ballet. After watching one small girl who was practicing by herself, I concluded that had she been on a Western stage, she would have been a star.

Radiated children stand out because they are underweight, under height, hyperactive and pale. Their faces are tense; they cry easily and complain of headaches and insomnia. The incidence of alcoholism, drug addiction, promiscuity and suicide is high and increasing.

All the children are undernourished, because meat, milk and vegetables are too expensive. Their diet is bread and potatoes, day after day. Yet when foreign guests visit a Ukrainian home, hospitality and pride compel their hosts to sacrifice for a table groaning under traditional delicacies that have taken days to prepare.

The golden domes of the Eastern Orthodox churches of Chernigev glisten in the sun, but the harmonic a cappella singing that resonates within them belies the suffering of this people. Government officials confirmed that, as a nation, Ukraine has hit rock bottom, its condition seemingly beyond the ability of the West even to comprehend.

I returned home reflecting on the significance of what I had seen. Chernobyl was a global catastrophe that illustrates the phenomenal power locked within nature. Such fundamental forces demand the highest levels of respect. Chernobyl was a demonstration of what can happen when such respect is lacking—the law of unintended consequences at work, where the misjudgment of the few results in the misery of the many.

Ten other antiquated nuclear plants remain in a leaking and corroded condition in Ukraine. International efforts to repair and upgrade them so as to avoid more catastrophes are ongoing.

At its heart, Chernobyl is a continuing human tragedy. As I discovered, Ukrainians are largely an abandoned and forgotten people. The announcement of the plant’s closure, though it grabbed world headlines, did not provide closure to their suffering.

“If we forget about it, Chernobyl will never be in the past; it will be in the future as well.”

Vasily Pasichnyk, founder and director of the Chernigev Center of Medical Social Rehabilitation of Disabled Children, shares that concern. The doctor wrote to me in February, lamenting that although the Chernobyl nuclear power station is closed, the problems continue. He remarked that many Europeans thought all the problems would be in the past once the station was closed. That kind of thinking, he wrote, “would be another mistake of our civilization.” If we forget about it, he continued, “Chernobyl will never be in the past; it will be in the future as well.”

How can we put this indescribable tragedy in perspective? It is, after all, only one of many human disasters we could cite. I believe we can all take comfort in the knowledge that a just and merciful God is working out a great plan in which all human lives will one day realize their full potential.

That plan is described in the Scriptures, and we are dedicated to exploring its various aspects in each issue of Vision. The apostle Paul wrote: “For I consider that the sufferings of this present time are not worthy to be compared with the glory which shall be revealed in us. . . . because the creation itself also will be delivered from the bondage of corruption into the glorious liberty of the children of God. For we know that the whole creation groans and labors with birth pangs together until now” (Romans 8:18, 21–22).

That is the truth, and the hope, of Chernobyl.