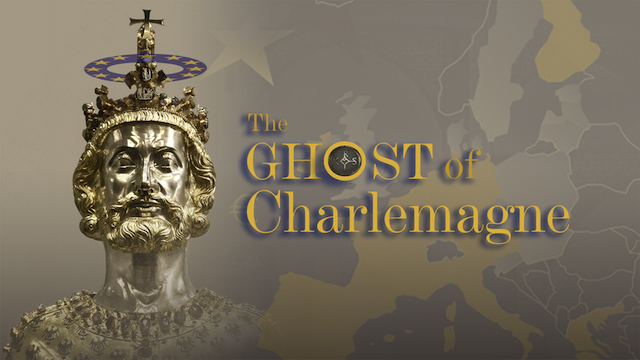 Whatever becomes of present efforts to head off the potential collapse of the euro, we have to admit that the past year has seen more discontent among European Union leaders than any time until now.

On the eve of a recent EU summit in Paris, German chancellor Angela Merkel expressed her concern about the economic situation in Europe: “The situation is serious, and we have the obligation of building a strong and stable Europe for tomorrow. We will then have to consider the political future of European economic and monetary union. I have said we need more Europe, we need a Europe that functions. Markets are expecting that. And we need a Europe whose members help each other out.”

It’s in times like these that the ghost of Charlemagne, also known as “the Father of Europe,” comes on the scene. Twelve hundred years after his death, Charlemagne is still celebrated in many places across Europe. You can find him on horseback in Paris, outside Notre Dame Cathedral; commemorated in the cities of Zurich, Frankfurt and Liège; being crowned by the pope in Raphael’s painting in the Vatican; and in Germany, on the market square in its capital of Aachen, the city he called a second Rome.

What kind of ruler was he, and why does he inspire such admiration? In what sense was he the father of Europe? Rosamond McKitterick is a highly regarded authority on Charlemagne. In a Vision interview she made reference to an epic poem naming him, in Latin, Pater Europa or “Father of Europe.” She went on to elaborate in detail.

McKitterick: “What you do also have is the undoubted fact that the Frankish Empire encompasses most of what we think of as Western Europe; and it’s certainly also the case that nearly every Western European country you go to feels that Charlemagne was part of their history. A fascinating instance of that was in the year 2000, when there were celebrations of Charlemagne in Croatia, in Catalonia, in York, in France, in Germany, in Italy and in the Netherlands, where everybody thought there was something of this king that represented something of their past.

“The other aspect, of course, is that it’s because of Charlemagne that this area was united politically—but it’s also, of course, brought under Christian rule. Christian churches undoubtedly spread; there’s conversion and mission and new monasteries. And what you then have is a common Latin-Christian culture, which is introduced to this entire realm. Latin becomes the language in which everybody communicates, regardless of what their native language might be, and regardless of the way in which they might pronounce Latin, which might have been quite weird in some instances. But that’s uniting, and that whole emphasis on culture you get—the Christian knowledge—becomes the basis of everybody’s education, and it becomes the basis of the way everybody then develops intellectually. What you also have, of course, is a governmental system, a way of ruling, and a style of rulership which involves Christianity, that’s absolutely the moral responsibility of the ruler to maintain. That, too, is something that’s spread across Europe, and it’s so long-lasting. And in that respect, I think he could be counted as the Father of Europe.”

When the New York Times spoke of needing Charlemagne now, the author of the opinion piece, historian Istvan Deak, left out of his formula any one dominant religion. He wrote: “A new imperial construct embracing all nations, religions and non-totalitarian ideologies might well be the only alternative to the revival of tribalism with all its tragic consequences. And it will be the sacred task of leaders to make the rest of society see this as an exalted, almost religious goal: a new European faith that belongs to no church.”

Yet Deak begins his article with a reference to “the last pretender” to the Austro-Hungarian throne, Otto von Hapsburg. He said 50 years ago that Europe needed more than economic cooperation to weld it together. According to Deak, von Hapsburg wrote that “only something as mystical as the Holy Roman Empire could give people hope, a sense of religious renewal and combat the pernicious effects of local interest, chauvinism, xenophobia and racism.”

Having interviewed Otto von Hapsburg a number of years ago at his home in Germany, I can say that his view of what Europe needed certainly included religion as defined by the Roman Catholic Church. In this he was not so different from Charlemagne, who gave rise to the Holy Roman Empire. Though he was a German-speaking Frank, the pope crowned him emperor of the Romans in Rome on Christmas Day in 800 AD.

Charlemagne considered himself Defender of the Faith and worked to bind his vast territories together under Latin-speaking Roman Christianity. He was encouraged to see himself as the new Constantine, the fourth-century Roman emperor whose edicts Christianized the West. In fact, many aspects of his rule demonstrate an emulation of Constantine and things Roman. Take, for example, his throne—still on view in Aachen. It was made from stone imported from Jerusalem.

Constantine himself had an unusual relationship with Jerusalem, building the Church of the Holy Sepulcher over Christ’s supposed burial place. It seems that Charlemagne built his Aachen chapel following a blueprint of Constantine’s Jerusalem structure.

McKitterick: “I think it’s possible that Charlemagne had it in mind that Aachen chapel would be his mausoleum. The reason I think this—and it’s only a thought, I have no proof for it—has to do with the kinds of things you’re suggesting, like emulation of Roman emperors and Roman styles, but also with the way in which his burial is described. The Life of Einhart by Einhart says that when he died, he was buried instantly, which actually was quite strange, because his son Louis raced up to Aachen as fast as he could in January, but his father was buried by then. They had an inscription, that is described, and appears to have been ready. So it’s a possibility that he thought, ‘I’m going to have a wonderful mausoleum, and it’s going to be my chapel; and when I die, I will be in there.’ So it becomes a kind of shrine—an imperial shrine, but in the style of a Roman emperor.”

When people speak of Charlemagne in terms of the inspiration for resolving today’s European problems and yet fail to mention his intense religious and Roman imperial orientation, it seems more than a little off center. The fact is that Otto von Hapsburg was no doubt correct when he said that something mystical will be needed to pull Europe together if it is to succeed. What he meant included existing Roman Catholic religion. Whether it will be recognizable religion or some broad ecumenical understanding remains to be seen. As for the survival of the euro, that seems to be a temporary diversion in the search for the tie that will finally bind Europe together.