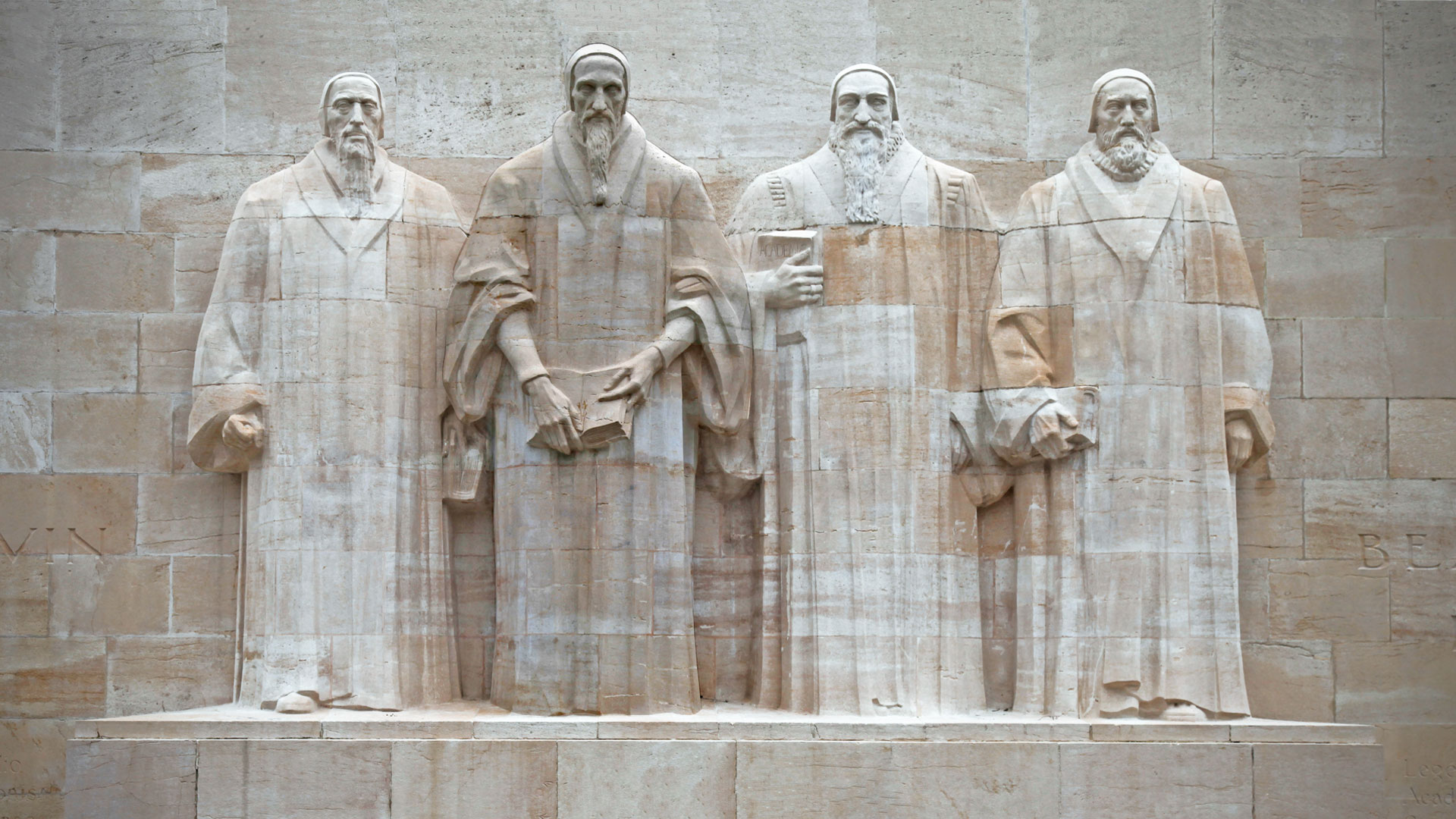 The early history of the Reformation is filled with the names of men who are credited with bringing the movement to life. Martin Luther, upon nailing his 95-point list of concerns on a Wittenburg door, is thought to have provided the Reformation its spark. John Calvin, though no more than 9 years of age at that event, is placed alongside Luther as one of the most influential theologians and thinkers of that time.

Calvin, whose quincentenary was commemorated this year with an internationally touring interdisciplinary conference, was born in 1509 to a middle-class provincial family in Picardy in northern France. While little is known about his childhood years, Calvin’s father seems to have been instrumental in providing his son with opportunities for higher education. Young Calvin’s early training was primarily in preparation for a position of ecclesiastical service and the priesthood. At the age of 12 he received the chaplaincy for the cathedral at Noyon. In 1523 he traveled to Paris, intending to continue his studies toward the priesthood, but instead he began to study law. One source suggests that his father had a disagreement with church authorities in Noyon and therefore directed his son toward law. Calvin, who seldom revealed autobiographical details in his writing, provided insight on this significant change in direction in the preface to his commentary on the book of Psalms.

“When I was as yet a very little boy, my father had destined me for the study of theology. But afterwards when he considered that the legal profession commonly raised those who followed it to wealth this prospect induced him suddenly to change his purpose. Thus it came to pass, that I was withdrawn from the study of philosophy, and was put to the study of law. To this pursuit I endeavored faithfully to apply myself in obedience to the will of my father; but God, by the secret guidance of his providence, at length gave a different direction to my course.”

It was during his study of law that he was exposed to the ideas of humanism through his university teachers. It was also during this time that he slowly became disenchanted with the church in Rome and its pervasive system of beliefs.

He wrote: “And first, since I was too obstinately devoted to the superstitions of Popery to be easily extricated from so profound an abyss of mire, God by a sudden conversion subdued and brought my mind to a teachable frame, which was more hardened in such matters than might have been expected from one at my early period of life.”

Calvin is known to have been gifted with a well-organized mind and intellect, and many who knew and worked with him also admired his character.

It is thought that he became acquainted with the ideas of the Reformation during his law studies, but in any case, Calvin progressed in his interest in the ideas promoted by Luther and Zwingli, adding them to his own deeply entrenched humanistic ideas, especially those of the Greek philosophers. He was also greatly influenced by the study of Augustine’s writings. For example, his approach to the understanding of the will of man is seen as a direct influence from his study of this early church father. The Presbyterian writer Benjamin B. Warfield wrote that Calvin’s doctrines amounted to a “great revival of Augustinianism.”

While studying in France, he began work on his most important work: The Institutes of the Christian Religion. The Institutes (as they are commonly known) were first published in 1536. Calvin asserted that his purpose for the work was “to prepare and train candidates for the sacred office, for the study of the sacred volume, that they may both have an easy introduction to it, and be able to prosecute it with unfaltering step; for, if I mistake not, I have given a summary of religion in all its parts, and digested it in an order which will make it easy for any one, who rightly comprehends it, to ascertain both what he ought chiefly to look for in Scripture, and also to what head he ought to refer whatever is contained in it.”

It is from the massive Institutes, his most enduring work, that much of what is known as Calvinism is codified and established. He wrote prolifically, writing commentaries on the Bible and other works that are revered in many reformed and Protestant circles today. His works are best characterized as containing a strict reading of the Bible combined with his progressive views and interpretation of the Scriptures.

Calvin meant for his Institutes to summarize what he believed were the basic tenets of Christianity. One of the core beliefs for him was the doctrine of original sin. Calvin believed that “Man, by his fall into a state of sin, hath wholly lost all ability of will to any spiritual good accompanying salvation; so as a natural man being altogether averse from that good, and dead in sin, is not able, by his own strength, to convert himself, or to prepare himself thereunto” (Confession of Faith IX, iii).

The Institutes grew with each successive publication. His followers attempted to simplify some of its content further by using the acrostic TULIP; each letter stood for one of the five central fundamentals of Calvinism: Total Depravity (the belief that mankind is immersed in sin, and there is little good within him), Unconditional Election (the belief that God has chosen some for glorification and some for condemnation), Limited Atonement (the belief that Christ’s death was only for a select group of people), Irresistible Grace (the belief that those whom God has “predestined” will respond to the calling), and Perseverance of the Saints (the belief that the saints will remain in God’s hands and can do little to change the outcome).

The basic tenets of Calvinistic beliefs center on the subject of predestination. The New Schaff-Herzog Encyclopedia states that due to “the extraordinary emphasis put upon the subject, the Genevans were taught to consider it almost the corner-stone of the Christian faith.” Calvin believed that there were those who were predestined to be called by God. And there was little they could do to keep from receiving their reward. These beliefs stemmed more from Calvin’s view of the human condition and Augustinian philosophy than from what is revealed in the Scriptures.

After the publication of the Institutes, Calvin’s wanderings led him to Geneva, Switzerland, in July 1536, where he began what was to be a long but stormy relationship with the city lasting until the end of his life. He intended to stay only for a short time; however, he was persuaded by his close friend Guillaume Farel to extend his visit. The two men began to enact severe reforms in Geneva based on their interpretation of the Scriptures. Believing that men were basically evil at their best, the reforms were an enforcement of a strict moral code on the citizens. One author states that “naturally, the people of Geneva believed that they had thrown away one church only to see it replaced by an identical twin; in particular, they saw Calvin’s reforms as imposing a new form of papacy on the people, only with different names and different people.”

As a result of these harsh reforms, both Calvin and Farel were soon ordered to leave Geneva. Ironically, he was invited back to Geneva in 1541 by one of the ruling councils of the city. Upon his return, he was given the authority to rule and order the city’s affairs as he saw fit. He remained there until his death in 1564. His final years in Geneva were productive, as he enacted ecclesiastical and civic reforms, preached, wrote his numerous commentaries, and continued work on his Institutes of the Christian Religion. Naturally the rigorous reforms that he brought about were unpopular among many people. One reference mentions that some named their dogs after Calvin in a show of disdain.

Despite opposition and numerous critics, Calvin’s reforms—felt across Western Europe—set the standard for other Protestant or Reformed systems that came after him. The religious system he established was later adopted by groups such as the Congregationalists, Presbyterians and Puritans. In addition to these groups, Calvin’s philosophies also later influenced the architects of the fledgling democracy of the United States two hundred years after his death.

Indeed, even as multiple conferences and commemorations celebrating his legacy diminish, few can deny the effect that this man has had on the modern Protestant movement. However, it also must be acknowledged that a clear reading of the Bible spawns significant challenges to his beliefs.