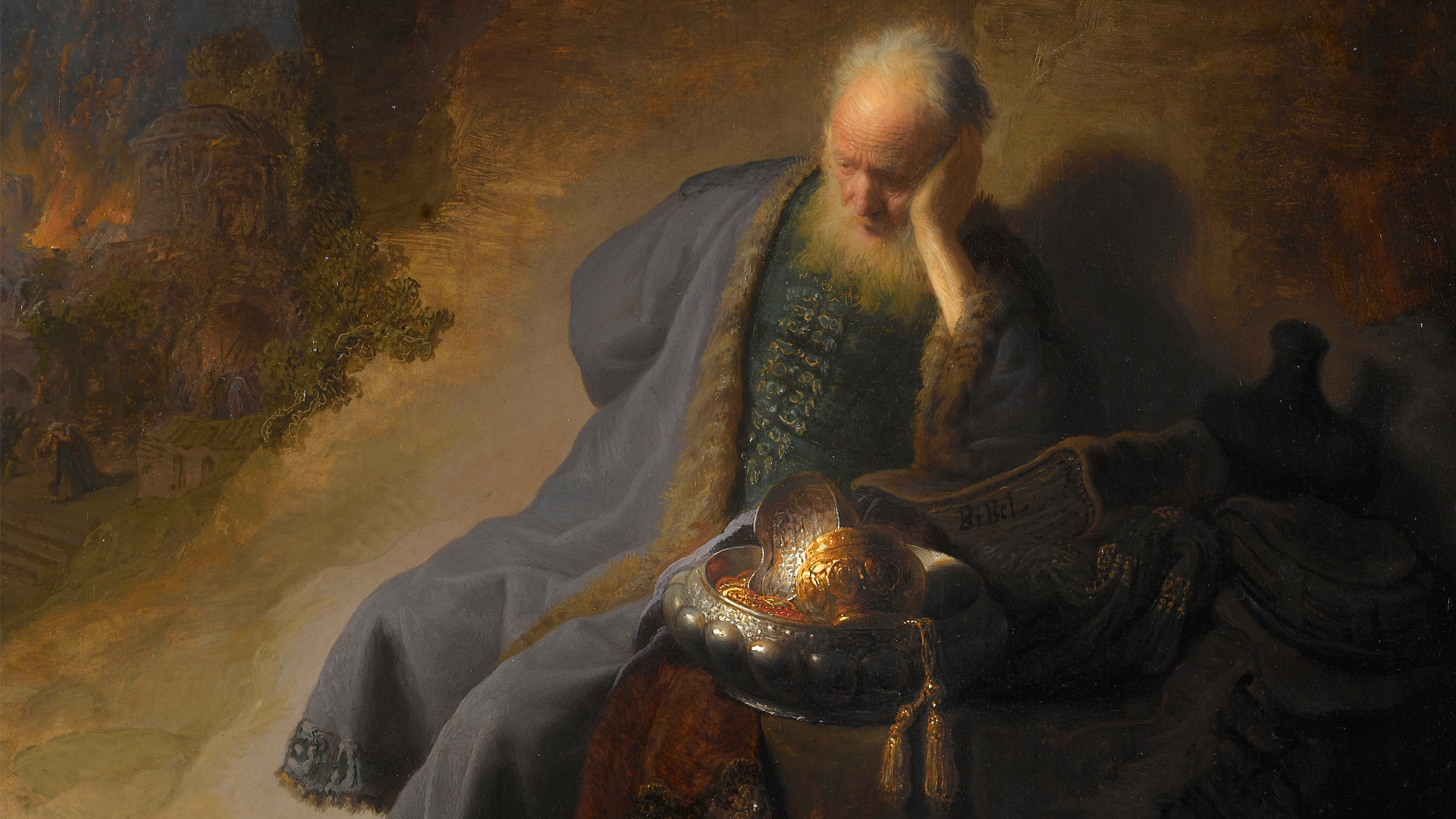 In the period when the Assyrian king Shalmaneser exiled the northern tribes of Israel under Hoshea, a very different king came to power in the southern kingdom of Judah.

At the age of 25, Hezekiah assumed the throne from his father Ahaz and ruled as a God-fearing king for 29 years. Early in his reign he cleansed the temple, reestablished worship there, and rid the land of pagan high places and Canaanite idols (2 Kings 18:1–5; 2 Chronicles 29:1–36). He also reinstituted the collective celebration of the Passover at Jerusalem, inviting northern Israelites who remained after the Assyrian capture of Samaria (2 Chronicles 30:1–27).

Hezekiah was also a wise military defender; a reminder of his strategic skill remains to this day in a tunnel chiseled through bedrock to bring spring water inside Jerusalem’s walls during an invasion by the Assyrians under Sennacherib (32:30; 2 Kings 18:13). To placate the invader, Hezekiah paid the demanded tribute in silver and gold taken from his house and from the temple. Sennacherib then sent emissaries and a large army to Jerusalem to persuade Hezekiah’s leaders to surrender. Attempting to divide their loyalties, the emissaries told them that they should lean neither on Egypt to help, nor on God. Hezekiah was devastated by the thought of the coming attack and sought help from the prophet Isaiah (2 Kings 19:1–5). Isaiah explained that the Assyrians would be affected by rumor and unrest in their camp and would soon hurry home.

At this point an Ethiopian king, Tirhakah, appeared on the scene and prepared to attack the Assyrians, who—now under pressure—tried once more to have the Jews surrender. Hezekiah sought God’s help and, with further support from Isaiah, was able to avoid dealing with Sennacherib. Along with his men, the Assyrian was overcome with concern as predicted and quickly left for Nineveh, where he suffered assassination at the hands of two of his sons and was succeeded by a third son, Esarhaddon (verses 8–37; 2 Chronicles 32:20–22; Isaiah 37:21–38).

Fourteen years into his reign, Hezekiah fell deathly ill with an infection. Isaiah came with a shocking message that he should set his house in order and prepare to die. The king’s prayerful entreaty to God brought about a reprieve, and God instructed Isaiah to return and tell the king that he would live a further 15 years and that the Assyrians would not trouble him (2 Kings 20:1–6; 2 Chronicles 32:24–26).

When the Babylonian king, Berodach-Baladan, sent emissaries with messages of good will, God tested Hezekiah, allowing him to respond as he felt fit. Appreciative of the gesture, the king foolishly showed the visitors the contents of his treasury. As a result, Isaiah came with a warning that the wealth of Judah would be looted by future Babylonians. Not only that, but some of Hezekiah’s sons would become eunuch servants of the Babylonian kings (see Daniel 1:11, 18). Hezekiah’s all-too-human response was gratitude that there would at least be peace in his day (2 Kings 20:12–19).

During his reign, God also sent messages by another prophet. Micah likewise warned of Judah’s coming downfall: “Zion shall be plowed like a field, Jerusalem shall become heaps of ruins, and the mountain of the temple like the bare hills of the forest” (Micah 3:12).

When Hezekiah died, his 12-year-old son, Manasseh, succeeded him and proved to be one of the most wicked ever to rule in Judah. Over a 55-year period, he did much spiritual damage, shedding innocent blood and reversing many of his father’s religious reforms. He took Judah back into idolatry, reestablished the high places, and practiced witchcraft and sorcery, desecrating even the Jerusalem temple (2 Kings 21:1–9; 2 Chronicles 33:1–9).

As a result, God made it clear that a final catastrophe such as had claimed the northern peoples awaited the remaining tribes of Israel: “I will stretch over Jerusalem the measuring line of Samaria and the plummet of the house of Ahab; I will wipe Jerusalem as one wipes a dish, wiping it and turning it upside down. So I will forsake the remnant of My inheritance and deliver them into the hand of their enemies; and they shall become victims of plunder to all their enemies” (2 Kings 21:13–14).

Yet the end did not come immediately. Captured by the Assyrians, Manasseh was taken to Babylon where, chastened, he repented. As a result, God brought him back to Jerusalem. During the remainder of his reign, he reversed many of his idolatrous practices but allowed the people to use the high places to worship God (2 Chronicles 33:10–17).

“Manasseh’s deeds lived after him. His repentance could not recall the mischief they had done to the nation. They went working on after his decease, propagating and multiplying their influence, till the nation was destroyed.”

Manasseh’s son Amon succeeded him at the age of 22 but did not pursue his father’s reforms. His death at the hands of his servants, after only two years on the throne, brought his 8-year-old son, Josiah, the last truly righteous king of Judah, to the throne.

Josiah proved to be a considerable force for good during his 31-year reign. At the age of 16 “he began to seek the God of his father David,” continuing to cleanse Jerusalem and Judah of idolatry when he was 20 (34:3). Six years later he organized the repair of the temple and was deeply moved by the discovery there of the Book of the Law and the realization that the nation was guilty of breaking its covenant with God and of gross disobedience.

When the priests consulted on his behalf with the prophetess Huldah, she delivered the following message from God: “I will bring calamity on this place and on its inhabitants—all the words of the book which the king of Judah has read—because they have forsaken Me and burned incense to other gods, that they might provoke Me to anger with all the works of their hands. Therefore My wrath shall be aroused against this place and shall not be quenched” (2 Kings 22:16–17; see also Leviticus 26:31–32).

God’s word for Josiah specifically was that since he had served God faithfully, the end of the nation would not come in his time (2 Kings 22:18–20). Nevertheless, Josiah’s realization that curses would come upon Judah, unless they adhered to the law, led him to make a covenant with God. He rid the land of idolatry. His reformation was thorough in that he removed the corrupted priesthood, banned sexual rites within the temple and the sacrificing of children, and desecrated the structures of previous idolatrous kings back to Solomon’s time, including pagan images, high places and worship sites throughout Israel, north and south. One of his actions fulfilled a prophecy given three hundred years earlier: he destroyed an altar and image at Bethel, set up by Jeroboam I—the initial act in northern Israel’s departure from God.

Josiah’s proclamation of a renewed Passover observance in Jerusalem brought together “all Judah and Israel who were present” (2 Chronicles 35:18). It’s recorded that “such a Passover surely had never been held since the days of the judges who judged Israel, nor in all the days of the kings of Israel and the kings of Judah” (2 Kings 23:22).

Yet despite Josiah’s reforms, the sins of the past—especially those of Manasseh—had caused God to determine an end to all Israel in the land: “And the Lord said, ‘I will also remove Judah from My sight, as I have removed Israel, and will cast off this city Jerusalem which I have chosen, and the house of which I said, ‘My name shall be there’” (verse 27).

As God had promised, Josiah did not live to see the captivity of his people. When geopolitical events in the region brought Pharaoh Necho into the land en route to the Euphrates to support the Assyrians against the Babylonians, Josiah challenged the Egyptians at Megiddo in northern Israel and was fatally wounded (verses 28–30; 2 Chronicles 35:20–24).

Buried in Jerusalem, Josiah was succeeded for three months by his son Jehoahaz. But he was captured and imprisoned by Necho and was in turn replaced by Pharaoh’s preference, Josiah’s 25-year-old son Eliakim, renamed Jehoiakim. Ruling for the next 11 years, he was not obedient to the law of God as his father had been.

The prophet Jeremiah came early in Jehoiakim’s reign, saying that repentance would bring the cancelation of impending calamity. Otherwise God would make the temple a desolation and Jerusalem “a curse to all the nations of the earth” (Jeremiah 26:1–6). Another prophet, Urijah, confirmed Jeremiah’s words, only to be condemned to death by Jehoiakim (verses 20–24).

Judah’s refusal to listen brought Nebuchadnezzar’s first Babylonian attack on Jerusalem in 605/604 BCE, when he made the king his vassal for three years and removed some of the aristocracy to his capital (see Daniel 1:1–4). Because Jehoiakim then rebelled, God used Nebuchadnezzar to send raiding bands of Chaldeans, Syrians, Moabites and Ammonites from the surrounding lands against Judah. This was done to fulfill the word of the prophets (2 Kings 24:1–4; see also Jeremiah 35:11).

Jeremiah also prophesied the unregretted death of Jehoiakim: “Therefore thus says the Lord concerning Jehoiakim the son of Josiah, king of Judah: ‘They shall not lament for him, saying, “Alas, my brother!” or “Alas, my sister!” They shall not lament for him, saying, “Alas, master!” or “Alas, his glory!” He shall be buried with the burial of a donkey, dragged and cast out beyond the gates of Jerusalem’” (Jeremiah 22:18–19). The king likely died during the Babylonian siege of Jerusalem in 597 and was succeeded by his son.

Aged 18 at the time, Jehoiachin ruled a mere three months before being taken captive and removed to Babylon, along with thousands of others including family members, aristocracy, warriors and craftsmen. Jerusalem was plundered, as were its treasures and the gold articles from Solomon’s temple (2 Kings 24:10–16). The invaders installed the king’s 21-year-old uncle Mattaniah (renamed Zedekiah) on the throne, and he ruled for a further 11 years.

“Houses and the king’s palace were destroyed, the city’s defenses were razed, but perhaps the most devastating loss was the temple. The temple symbolized the presence of God to the people.”

Like his predecessor, he was unresponsive to Jeremiah’s words (2 Chronicles 36:12). His rebellion against Babylon, and the inhabitants’ recalcitrance, brought on the final destruction of Jerusalem (2 Kings 24:19–20; 2 Chronicles 36:13–21). In 587 the Babylonians returned to lay siege to the city for 18 months, causing a severe famine. Zedekiah fled the city but was captured and judged. Forced to witness the execution of his sons, he was then blinded and taken in chains to Babylon. Much of Jerusalem was destroyed by fire, including the temple and the king’s house, and the city’s walls demolished. Most of the remaining Jerusalemites, including the chief priest, his deputy and three temple doorkeepers, army leaders and a military recruiter, five of the king’s associates, a few rural people, and a number of Jewish defectors, were taken captive and killed on the way to Babylon (2 Kings 25:1–21).

Only a few of the agricultural poor were left by the Babylonians to farm the land. They were supervised by Nebuchadnezzar’s appointee as governor, Gedaliah. A number of remaining captains and their armies also remained and were advised by the governor to cooperate with their Babylonian overlords. However, one of them assassinated Gedaliah, causing all the remaining people to flee to Egypt for safety (verses 22–26).

In contrast to the fate of Hoshea, the final king of Israel who presumably died in the Assyrian prison in which he’d been shut up, a successor to Nebuchadnezzar released Jehoiachin from prison almost four decades after his captivity and allowed him to eat at the king’s table for the rest of his life (verses 27–30).

Three major prophets—Isaiah, Jeremiah and Ezekiel—had played a role in warning of Judah’s downfall and captivity. Next time, a look at the work of Isaiah.