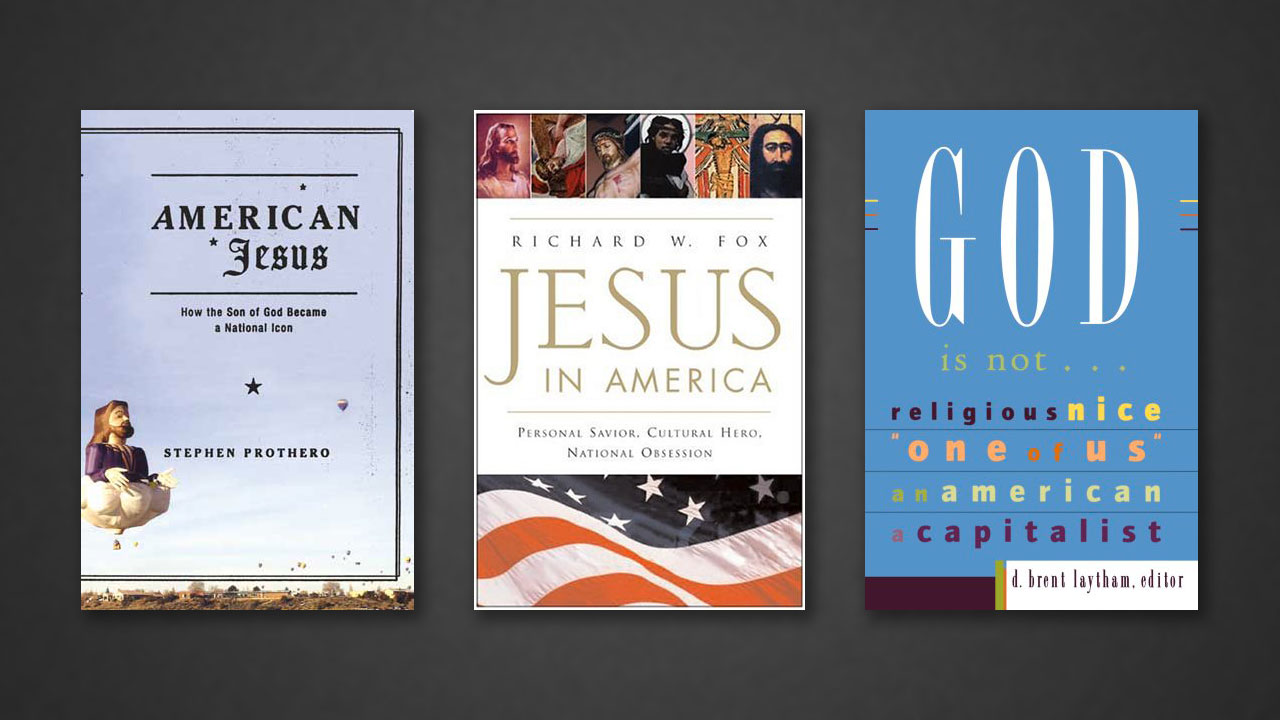 According to three books on the images of God and Jesus, we have done just that. We have collectively made them into our image, our likeness. They are black and white, capitalist and socialist, revolutionary and comforting, pacifist and warrior, feminine and masculine, detached and friendly.

A wide-ranging picture of Jesus emerges from two of the books about Jesus in the United States. But rest assured this is not just an American phenomenon, as Jesus’ evolving image will strike a chord with people the world over.

There is no more thoroughly delightful or witty way into this terrain than Stephen Prothero’s cultural history of the American Jesus. He states that “what Americans have seen in him has been an expression of their own hopes and fears—a reflection not simply of some ‘wholly other’ divinity but also of themselves and their nation.”

In Prothero’s view, the American Jesus was born in the Jeffersonian White House. With razor blade in hand, Thomas Jefferson cut out those portions of the New Testament that he couldn’t accept, such as the miracles and the virgin birth. Jefferson “found the task ‘obvious and easy’; the true sayings, he later wrote, were ‘as easily distinguishable as diamonds in a dunghill.’” With only about one in ten Gospel verses left, Jefferson transformed Jesus into a reconcilable “enlightened sage.”

While Jefferson’s theological views might not be accepted by many today, his approach to Jesus gives Jesus a freedom of movement that He never had. Removing Christ from His religion allows for a general acceptance from believers and unbelievers alike. Prothero finds an uncanny resemblance between Jefferson’s enlightened sage of 1804 and the Jesus Seminar’s subversive sage almost 200 years later. Both found a way to remove Jesus from His original context.

Prothero then catalogs the kaleidoscope of images that have developed within a largely “Christian” framework: the Sweet Savior, the Manly Redeemer, and Jesus the Superstar.

The many images of Jesus are often reactive in nature. The passing of the first amendment granting religious freedom also freed the mind for personal exploration. Reacting to the Puritan theology that Jesus was, in Prothero’s words, “the incarnate God who came to earth to suffer and die on the cross in order to reconcile the sinful elect to his angry Father,” many Americans agreed to a feminized Jesus who was more cuddly than sovereign God.

Jesus has become all things to all people. Prothero concludes that in the United States, “he has been buffeted about by the skepticism of the Enlightenment, the enthusiasm of revivalism, and the therapeutic culture of consumer capitalism. When Americans demanded a feminized hero, he became sweet and submissive. When they demanded a manly warrior, he muscled up and charged into battle. As feminism and the civil rights movement gained momentum and baby boomers tuned into the New Age, he became a black androgyne as comfortable with his yin as he was with his yang.”

One might wonder what happened to the California-born Jesus movement. Rather than simply believing that the party is over and they all went home, Prothero thinks “it is a mistake to write off the Jesus People as irrelevant eccentrics. The Jesus movement represents a culmination of key trends in American Protestantism rather than a diversion from them. . . . Nondenominational megachurches may be the most important institutional legacy of the Jesus movement.”

The Splitting Image of Christ

Another impressively researched book, Jesus in America: Personal Savior, Cultural Hero, National Obsession by University of Southern California historian Richard Wightman Fox, begins with Columbus and the Spanish missionaries who followed him to the New World. Covering similar ground, Fox explores how Americans have molded the image of Jesus and the role He has played throughout American history.

Fox details the changing face of Jesus in our entertainment. He finds Jesus Christ Superstar and The Last Temptation of Christ to be “long-needed correctives”; Andres Serrano’s Piss Christ photograph thought-provoking; and Dan Brown’s The Da Vinci Code useful, because it forces many readers to think further. He adds that the “spat over [Mel] Gibson’s Passion shows how Jesus continues to function in early-twenty-first-century America as a symbolic marker in ongoing culture wars.” In the end, he concludes that “nothing could be more American [than] coming up with a new way of thinking about and marketing Jesus.”

After reading these two books, the reader might come away with the warm reassurance that whatever our image of Jesus, we are under the inclusive umbrella of a smiling or even a laughing God. Prothero and Fox offer no judgments—that is left to Brent Laytham’s God Is Not. In a manner akin to apophatic theology (we know God best by what He is not rather than by what He is), Laytham has assembled five other Christian scholars to make the difficult judgments.

In provocative and clearly written essays, contributors Rodney Clapp, Stephen Long, Michael Baxter, Michael Budde and William Cavanaugh argue that God is not religious, nice, “one of us,” an American or a capitalist. Laytham himself tries to end the book on a positive note with a chapter on who God is: one, holy, catholic and apostolic. Sadly, he misses the mark as he tries to apply the words of the Nicene Creed to God. He should have heeded his own advice, offered in the book’s introduction: “No, please don’t; anything but that! You don’t tell me ‘all your thoughts on God,’ and I won’t tell you all of mine, either.” Yet there are a lot of good, thought-provoking ideas leading to right conclusions in these essays, even if at times they are framed in unnecessary and nonbiblical arguments.

One might conclude after reading all three books that the vast numbers of believers with traditional views of God have been overlooked. If we are honest, we know that they haven’t been overlooked at all. We all, in some way, like to think of God as being on our side, liking what we like, sharing our opinions, and in general thinking like we do. As Laytham writes in his introduction, “those distortions we recognize easily are usually someone else’s problem. The distortions that hold us are most often exceedingly difficult to see.” A statement of beliefs doesn’t necessarily reflect where we live. This, of course, is at the heart of the message of the Bible and where God takes issue with us.

The image of God is meant to transform us, not help us become merely a better version of ourselves. We are to be like Him, but by some accounts this just isn’t happening. Modern Reformation editor Michael Horton laments, “Gallup and Barna hand us survey after survey demonstrating that evangelical Christians are as likely to embrace lifestyles every bit as hedonistic, materialistic, self-centered, and sexually immoral as the world in general.” There is a difference between the God we worship and the God we apply in our lives. Meanwhile, the secular public looks on in amusement.

To make God “one of us,” to bring Him from “up there” to “in here,” doesn’t just trivialize Him, it dismisses Him. Once we place God on par with man, we can simply believe in ourselves. Stephen Long, in his essay “God Is Not Nice,” writes that “it is as if God has been reduced to a friendly character with open arms who meets us at the entrance to his magic kingdom, inviting us to come in and find our individual fulfillment.”

“It is as if God has been reduced to a friendly character with open arms who meets us at the entrance to his magic kingdom, inviting us to come in and find our individual fulfillment.”

God does indeed invite us to know Him. But our response has been to give God and Jesus an extreme makeover. We have remade them in our image, after our “truth.” They are made to fit our worldview, to be more like us. Prothero writes, “In the book of Genesis, God creates humans in His own image; in the United States, Americans have created Jesus, over and over again, in theirs.”

A costume change will not change the message, however, only our perception of it. Therein lies the danger. We will be held accountable for, and we must respond to, His message as He intended it—not as we have willed it to be.

For example, God is love (1 John 4:8). And what is Godly love? We are told that love is the fulfilling of the law (Romans 13:10). It follows, then, that we get to know who and what God is through His law; by doing what He says. It is through the practice of His law that we come to know His love and gain a deeper understanding of who He is. We can’t know Him on our own terms.

By picking and choosing only parts of His teachings, we become something He never intended us to be, and we truly never find out who He is, what He is all about, and what He has in mind for us.