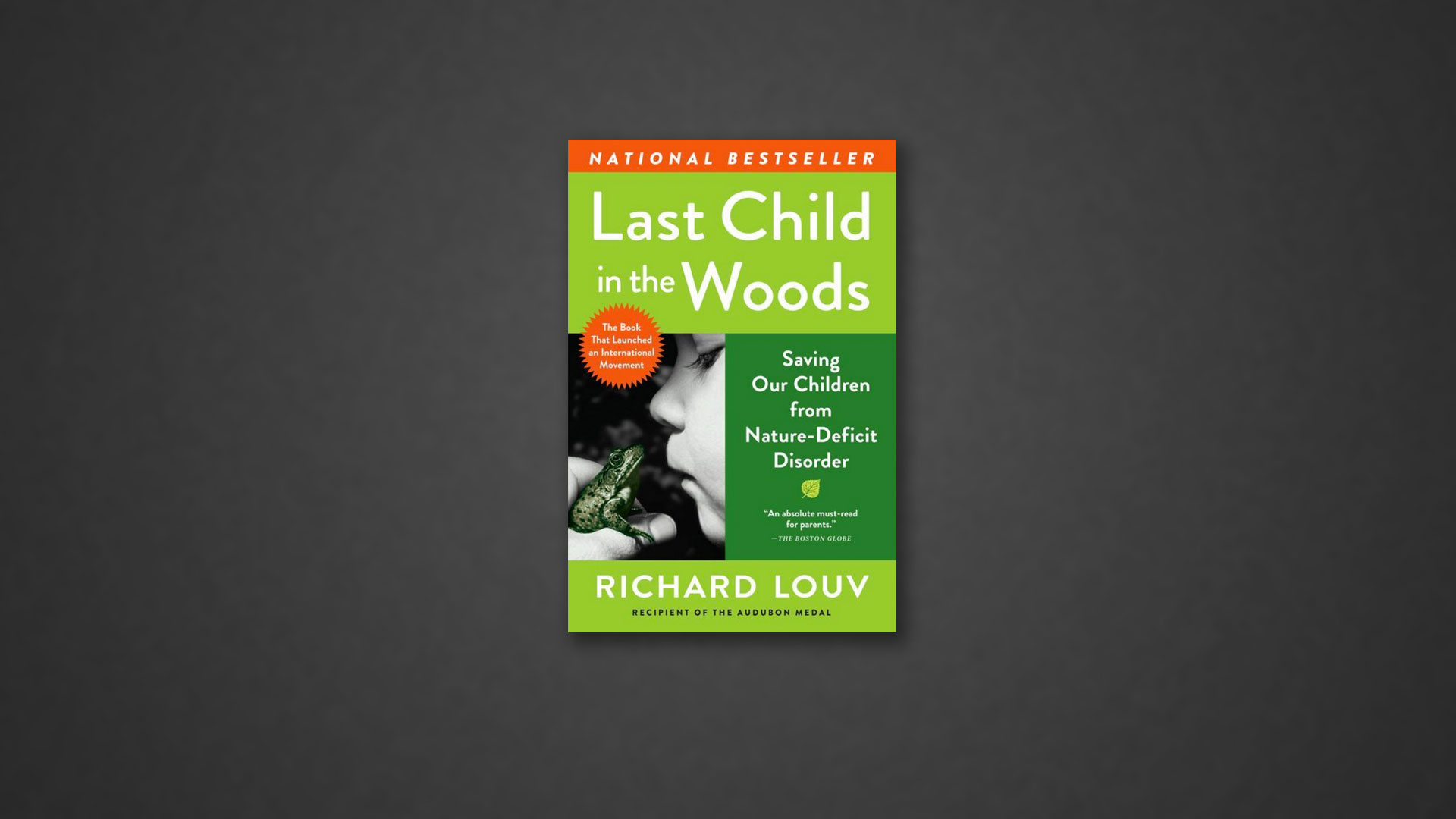 Is there a correlation between physical and emotional health and communion with nature? How important is it for kids to spend a significant amount of time in unstructured outdoor play? Have modern kids been separated from the natural environment? These questions form the focus of the book Last Child in the Woods: Saving Our Children from Nature-Deficit Disorder. Journalist Richard Louv, recipient of the 2008 Audubon Medal and chairman of the Children & Nature Network, challenges parents, schools and community leaders to put this missing dimension back into the lives of our children.

As a result of his analysis of the available research combined with personal reports culled from interviews and school visits, Louv has developed a compelling argument for shifting our attention—and that of our children—back toward the natural environment. Though perhaps somewhat idealistic, Louv’s recommendation does lay the groundwork for a discussion on community planning, the importance of nature in the health and development of children, and the role of adults in influencing children’s relationship with nature.

In laying out his case, Louv includes some disturbing statistics:

Louv’s suggestion is one of common sense: go outside and play. And he isn’t referring to organized or structured play; there are more kids in organized sports than ever before, yet obesity is increasing.

Throughout his book, Louv uses examples from studies conducted around the world that find that children who are given unstructured play time in natural play areas or who have access to nature test better in motor fitness (especially balance and agility), are more alert, better at using their bodies, and more likely to create their own games. They also show a greater ability to concentrate, imagine and develop stories.

Wisely, Louv does not advocate replacing prescribed drugs with play time in nature for children who have mental illnesses or attention deficit disorders. But, he does suggest that natural play as additional or preventative therapy has been overlooked, pointing to studies indicating that the closer and more prevalent nature is within a child’s environment, the lower the ratings of behavioral conduct disorders, anxiety and depression. Access to nature encourages higher feelings of self-worth, improved cognitive abilities, and an enhanced ability to make friends and also boosts the child’s attention span, improves resistance to negative stresses and depression, and provides a place for clearing the mind and relaxing.

In addition to physical benefits, Louv stresses the spiritual link humans have with nature—the innate need to experience the awesomeness of it. But, he laments, “some religious institutions and belief systems resist and distrust the suggestion that nature and spirit are related. Suspicious of environmentalism as an ersatz religion, they perceive a creeping cultural animism. This belief, which runs deep in American culture, is perhaps one of the least acknowledged but most important barriers between children and nature.” Far from assigning a religious ideology to nature, however, Louv’s main point is that the moments spent in nature are those when many feel least alone in the world and experience a connection with something bigger and more infinite than themselves.

Interestingly, Louv points out that adults are an important factor in restricting or encouraging a child’s relationship and access to nature. For example, he remembers building a tree house at the age of 9 or 10. Four stories and about 40 feet above the ground, “each ascending level became larger as the branches of the tree opened out,” says Louv, fondly describing the circus acrobatics required in order to gain access to the “crow’s nest.” Just reading this section would send shudders through most parents, but his point is critical: you don’t see many tree houses these days, and the ones you do see are often built by adults. It’s a fact that demonstrates one of Louv’s key points: parents, through their own overblown worries, often prevent children from exploring, enjoying and experiencing nature.

Some may feel Louv is a bit cavalier in his approach to this topic, but he makes a convincing argument. Children are growing up in a world where their freedom is limited. We limit their space by containing them—with strollers, paths, parks, walls, leashes, electronic devices. We pen them in classrooms most of the day, hemmed in by rules, rules and more rules. But interacting in nature gives children endless opportunities to develop important skills. By setting up too many rules and limiting their access to nature, adults may in fact be hindering children from developing the very skills they are trying to instill.

In years past, many children left early in the morning to play and stayed out until the streetlights went on. It’s an experience few children have today. Why? Parents, Louv suggests, are simply scared. They feel the world is a far more dangerous place than when they were children. But crime statistics tell a different story. According to the 2007 Duke University Child and Wellbeing Index, by 2005 the rates of violent crimes against young people had fallen to well below 1975 levels.

This overprotective approach, Louv argues, is harmful to our children’s future. “Imagine future generations of children who have been raised to accept the inevitability of being electronically tracked every day, every second, in every room of their lives, in the un-brave new world. Such technology may work in the short run, but it may also create a false sense of security and serve as a poor substitute for the proven antidotes to crime: an active community, more human eyes on the streets, and self-confident children.” Indeed, science backs up Louv’s claim that excessive fear has a deleterious effect on the physical structure of the brain, and he hypothesizes that it may have a similar effect on human culture. “One wonders,” he notes, “how the children growing up in this culture of control will define freedom when they are adults.”

If children grow up in ignorance about the world around them, never being alone, or falling down, getting dirty, lying down in the grass, learning from mistakes they’ve made—and at the same time are made to feel as if the world outside their door is dangerous, what kind of people will they be as adults? As our future policymakers, how will they value the protection of our natural environment? These are questions parents, teachers and civic leaders need to think about as they guide their communities, classrooms and homes.

Louv suggests that communities, teachers and parents begin to make a concerted effort to get children outside. He urges communities to create recreational areas that aren’t structured playgrounds, but instead places that foster exploration. He cites modern examples seen in some U.S. and European communities, such as “green roofs,” adventure playgrounds, partnerships between schools and natural recreational facilities, environment-based education, and the inclusion of urban wildlife as a focus in city planning.

While the wealth of information in Louv’s book can seem overwhelming at times, it is well worth exploring the valuable insight he provides. It is an important reminder of the responsibility that falls on parents, teachers and communities, and of all that can be lost if we don’t value nature as an important part of our experience on Earth. As we lose touch with nature, we lose touch with ourselves, with those around us, and with the wonder of our planet.

So what are you waiting for? Go outside and play!