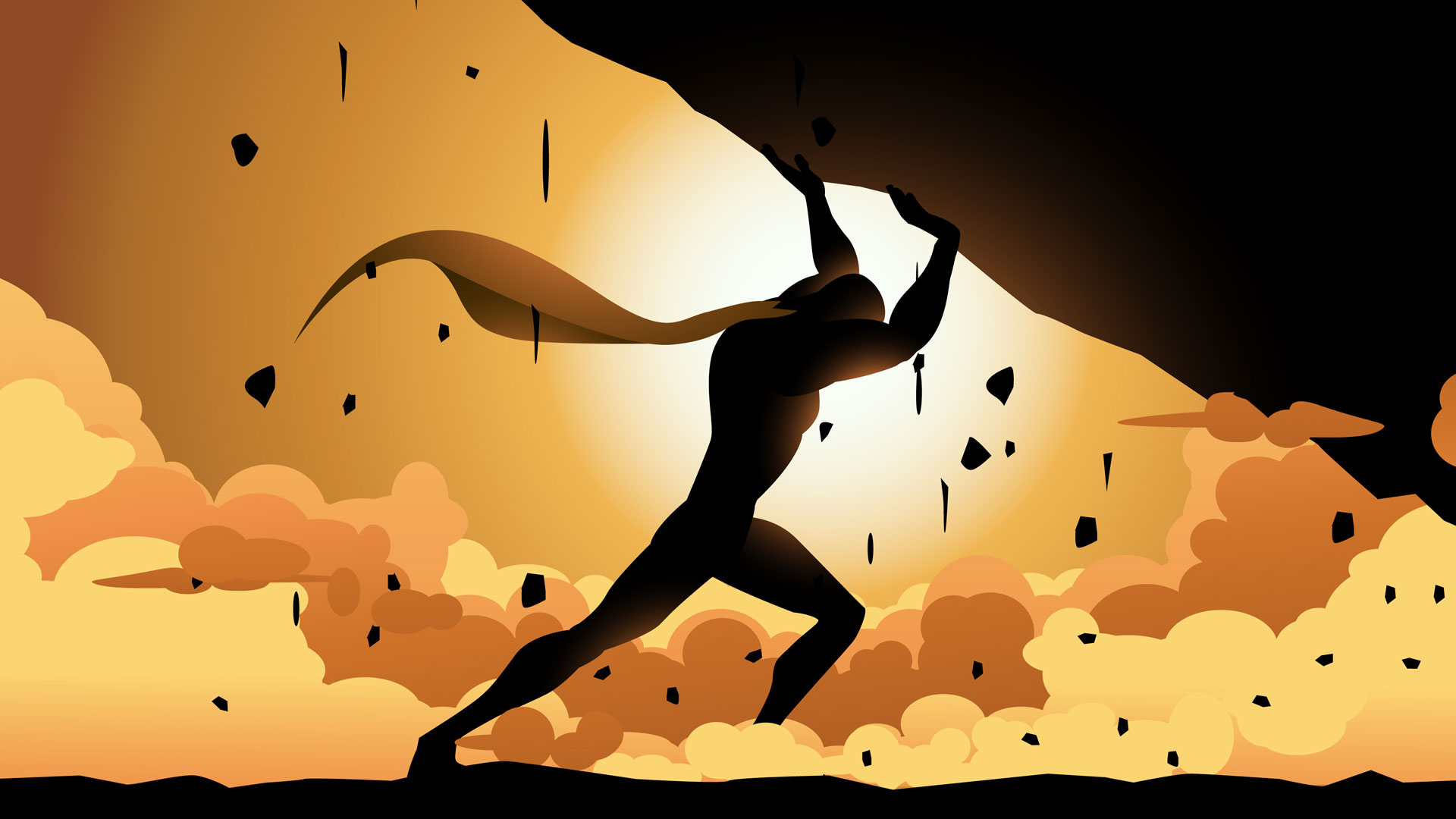 The notion of the hero figure has long been part of popular culture. Tales of Robin Hood have been told for approximately 700 years—describing England under the oppressive grasp of Prince John, a medieval, hooded master bowman dressed in Lincoln green, stealing from the rich to give to the poor. J. K. Rowling has given us a modern hero, Harry Potter, the young wizard battling the forces of the evil Voldemort. Of course, heroism takes on a whole new meaning when the savior figures concerned are superheroes with superpowers. The epitome of this genre is probably Superman, “the Man of Steel,” gifted with X-ray vision, the ability to fly, and superhuman strength, whose abilities are used to help save humankind from nefarious villains or natural disasters.

The hero theme is also seen in modern music. In the mid 1980s, the Welsh singer Bonnie Tyler cried out “I need a hero” in her pop ballad “Holding Out for a Hero.” This song was later used in the film Shrek 2, in a scene where Shrek comes to Fiona’s rescue, saving her from the clutches of the handsome but hapless imposter Prince Charming. More recently, the Canadian singer Lights, in her song “Saviour,” expresses the need for someone to come and save her—sooner rather than later.

The prevalence of this recurrent theme over the generations may indicate a deep-seated hope people have that all will turn out okay—someone will take action, come to their rescue and save them from the current peril or crisis.

It seems that when it comes to heroes we just can’t get enough. Of course, this longing is all just fantasy and could be excused as harmless escapism. It could never apply in the real world. Or could it? Sadly, many of the most despotic world leaders of previous centuries came in the guise of benevolent saviors, who rose to take on godlike status, leaving millions dead in the wake of their flawed programs. Mussolini, Hitler, Stalin, Mao and Pol Pot are some from more recent history who come immediately to mind. Unlike many of the heroes of literature, song and film, these all too real characters did not work for the common good. Yet amazingly, many average, ordinary people looked to these “heroes” to solve their problems. It seems that when there are desperate times many people fall prey to desperate remedies.

Some may argue that living in a more enlightened and democratic age, there is less risk of people looking to authoritarian figures to lead them and giving carte blanche to their policies. Modern Western societies especially appear much more skeptical and seem to be less easily fooled with tokenism and rhetoric than earlier cultures. Combine this with a mistrust of politicians and the political process, and you have a recipe for people taking it upon themselves to provide their own solutions to problems. In their song “Land of Confusion,” the rock group Genesis asks the question: “Superman where are you now?” In a land of too many people contributing to too many problems, they offer the hope that their generation will put it right. Rather than look to a superhero figure, they suggest we look to ourselves.

This is the world we live in / And these are the hands we’re given / Use them and let’s start trying / To make it a world worth living in.

On the face of it this would seem to be an ideal approach: appropriate action taken at a local level, where it is needed, by the people that are intrinsically involved. Indeed, many local community action projects thrive as a result of grassroots movements established by local citizens. While there is much good that we can do to help ourselves and others on a local level, human nature being what it is, this same principle is sometimes wrongly applied. For example, vigilantism, where individuals or groups take the law into their own hands and seek retribution or revenge, is a darker side of the same approach.

It is also true that not all problems are localized enough for our own small-scale efforts to completely resolve them. Increasingly, respected sources are issuing warnings of doomsday scenarios in regard to world population, food and water supplies, and global warming—all intrinsically linked. The Optimum Population Trust (OPT) is a UK-based environmental charity and think tank concerned with the impact of population growth on the environment. OPT challenges the view held by some that our population can continue to grow without detrimental effect, and the belief that perpetual growth in consumption-based economic expansion is possible. OPT offers this stark warning: “Every week 1.58 million extra people are added to the planet. Already the human species is causing serious environmental damage to its only habitat—Earth. The long-denied consequences of exploding populations on ecosystems, food supplies and energy resources are clear to all, but peaceful population policies continue to be low on the list of solutions. The alternatives—Nature’s methods of population control—are famine, disease and war.”

The issues humanity faces are increasingly large-scale and complex, where action in one part of the world has an impact far away. Environmentalist and author Lester R. Brown, whose many awards include the 1987 United Nations Environment Prize, is the founder of the Worldwatch Institute and founder and president of the Earth Policy Institute. In his book Could Food Shortages Bring Down Civilization? he argues that the combined effects of global agricultural, population, environmental and economic trends, along with subsequent political tensions, point to the potential breakdown of governments and societies. He offers as the only option a civilization-saving Plan B, which has four components: “a massive effort to cut carbon emissions by 80 percent from their 2006 levels by 2020; the stabilization of the world’s population at eight billion by 2040; the eradication of poverty; and the restoration of forests, soils and aquifers.”

Brown himself realizes that achieving this “requires extraordinarily demanding measures”; all of this will take coordinated investment and international cooperation on an unparalleled scale. But how likely is increased investment, especially in the wake of the global financial crisis? Linked to this is the need for politicians to be willing to make tough decisions now, for the longer-term good. Currently world leaders are struggling to agree on limits to greenhouse gas emissions in order to avert catastrophic global warming. Each nation has its own economy to consider, with the pressure to protect industrial output, retain jobs, maximize tax revenues and reduce welfare payments. Other big issues such as providing food and water for a growing world population will probably run into the same obstacles when vested interests take hold.

The time may be ahead, in the face of potential catastrophe, when our piecemeal approach to problem-solving is no longer sufficient. In this light, maybe it would be helpful if we had a world leader who could knock heads together, and make and enforce decisions on a global scale for the benefit of all. Are we in need of a hero after all? Do we then put our faith in such an emerging hero—trusting he will not go the way of so many before him?

In songs predating those previously referred to by several millennia, we find a message that warns against trusting in ourselves and in human savior figures. Many of these songs, or psalms as they are known, were written by the biblical King David, who knew all about failed leadership as he experienced the fall from grace of his predecessor, King Saul. Despite Saul’s promising start, which offered the hope of defeating his nation’s enemies, he slipped into moral decline. For example, in a fit of jealous rage Saul ordered that 85 priests be killed, along with the men, women and children of their city—for aiding his loyal servant and son-in-law, David.

Describing a future time of hunger, distress and anguish, when people will no doubt once again be looking for someone to save them, the biblical prophet Isaiah introduces us to a different kind of hero figure: “and the government shall be upon His shoulder, and His name shall be called Wonderful Counselor, Mighty God, Everlasting Father, Prince of Peace. Of the increase of His government and of peace there will be no end, upon the throne of David and over His kingdom, to order it and establish it with judgment and justice from that time forward and even forever” (Isaiah 9:6–7).

Whether the majority down through the ages have realized it or not, this world has always needed a hero, and that is still the case today. The hero that Isaiah looked to is described as one who will rule with a strong hand and get results; but unlike so many failed human leaders, one who will take action based on the principle of loving concern for humanity. That leader, of course, is Jesus Christ. More than a cute baby to be thought about at Christmas, more than a historical figure who did good and then died at the hands of the Romans, Jesus is described by the Bible as the living Son of God, who will return to this earth to rule and set it to rights.

Now that is a hero worth waiting for.