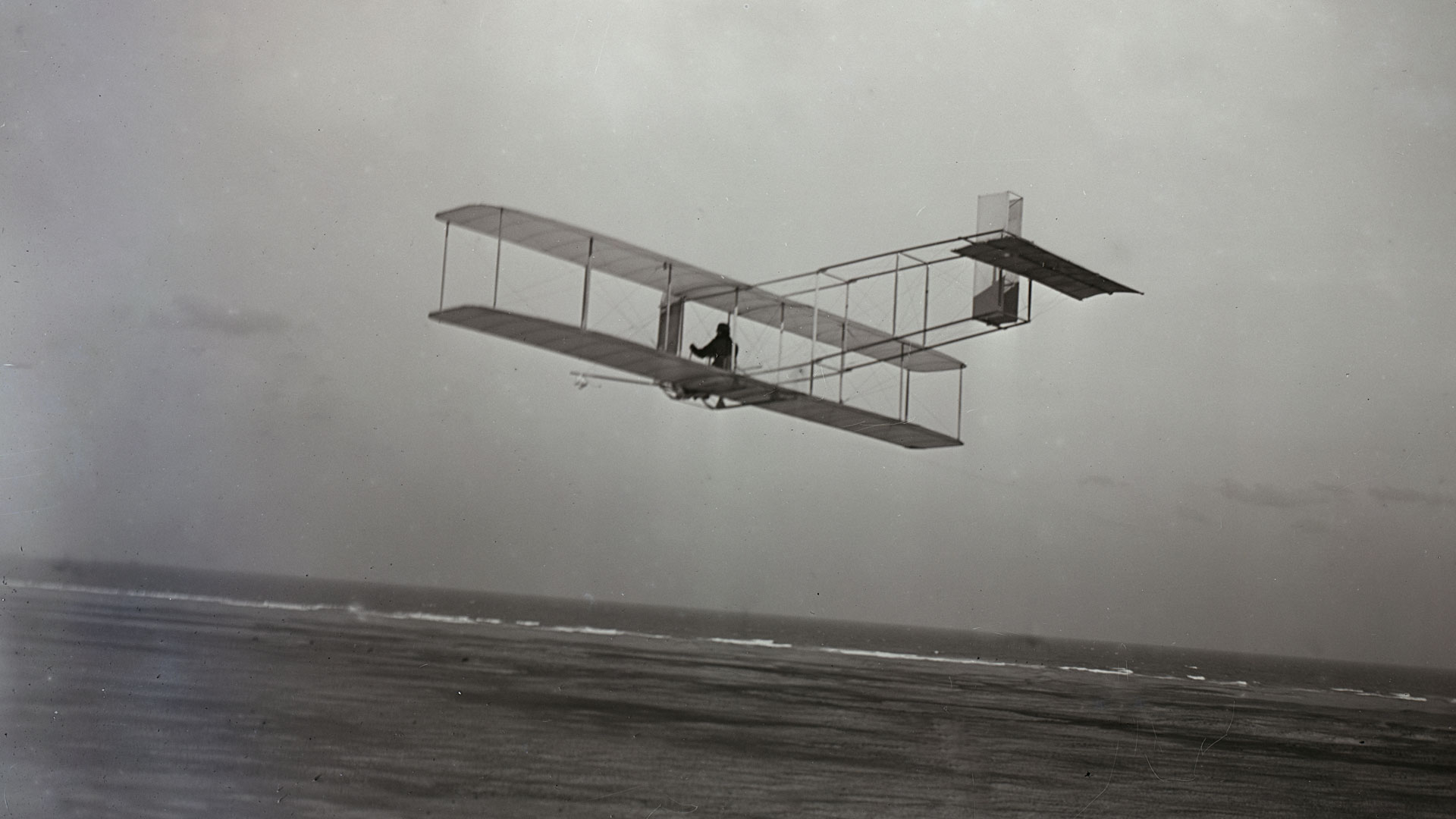 December 17 is the anniversary of an event that fundamentally changed the way humankind lives on this planet. Very few individuals today remain unaffected by its consequences. In a fashion attributed in times past to the mythological gods, this event has reshaped the world, bringing the four corners of the earth closer together in time if not literally in length and breadth.

Through a figurative tectonic revolution, the Wright brothers’ achievement of powered flight near Kitty Hawk, North Carolina, in 1903 recast civilization by opening a new dimension—the sky—to humanity. And while at times seeming to fade into the background of human accomplishment, man’s ability to fly continues to generate awe.

Even if we are little conscious of it, clearly we are embedded in the value, utility and convenience generated by those first flights of long ago. But beyond the practical matters of aviation, the work of Orville and Wilbur Wright provides a lesson about human potential that is generally overlooked. It is a lesson that, when eventually learned, will allow humanity to rise to even greater heights.

It is difficult to imagine the incredible changes that lay before the world 100 years ago at the outset of human flight. A taste of that time and of the mental gymnastics through which it took a man’s mind were recorded in, of all places, a beekeeping magazine. In the January 1, 1905, issue of Gleanings of Bee Culture, Amos Root gave his account of the startling sight of an airplane in flight:

“When it first turned that circle and came near the starting point, I was right in front of it; and I said then, and I believe still, it was one of the grandest sights, if not the grandest sight, of my life. Imagine a locomotive that has left its track, and it is climbing up in the air right toward you—a locomotive without any wheels, we will say, but with white wings instead. . . . Well, now imagine that locomotive, with wings that spread 20 feet each way, coming right toward you with a tremendous flap of its propellers, and you will have something like what I saw. . . . I tell you friends, the sensation that one feels in such a crisis is something hard to describe” (reported in Air & Space/Smithsonian, March 2003).

Today, a century after those preliminary flights of the Wright brothers’ Wright Flyer, the sight of an airplane hardly turns a head. A dream that might have been dismissed over the millennia with the assertion that “if God had meant man to fly, He would have given him wings,” has become our commonplace reality.

Our accomplishment of flight is indicative of something profound, beyond the normal order of nature.

At one time that maxim may have been a sort of mantra against humanity’s disruption of what many would have called the natural order of life. And indeed, our accomplishment of flight is indicative of just that: something profound, beyond the normal order of nature. It represents the human capability to understand cause and effect, action and reaction. No other organism has this capacity to understand and then to isolate and manipulate the components of a system to create new effects. Certainly one would be correct in observing that a spider or a bird is a great engineer in constructing an intricate web or a handsome nest. But these are not projects that involve conscious thought or calculation on the part of their creators; these animals operate on instinct, innate programs and behavior patterns that drive their activities without a conscious or knowing intent. They do not use knowledge from one area of application to solve a problem in another. A spider cannot build a nest of twigs, nor can a bird create a web.

Humans, on the other hand, can make this transfer of information. It may seem that God has denied us flight through lack of feathers, but in fact He has given us wings in the form of a conscious mind and the creative spirit to decode the laws of the universe that make such things as flight possible. The apostle Paul called this God-given power to learn, discern and apply knowledge the “spirit in man” (1 Corinthians 2:11a). The ability to understand laws—in this case the laws of physics that define flight—is uniquely human.

What were those laws that Orville and Wilbur Wright were able to comprehend? They concern two rather simple dynamic forces that act upon an object moving in the air: gravity and drag. Their properties (if not the vocabulary) would be recognized by even a child folding a paper airplane. A wing is designed to overcome gravity by producing lift as air passes across its upper and lower surfaces. An engine produces thrust to push the wing forward and to overcome drag, the natural resistance to moving through the air.

Through several years of trial and error with kites and gliders, the Wright brothers and others built components that could provide these qualities. The pair’s true innovation, however—the breakthrough that would set them apart from everyone else—was their discovery of how to steer in the air. They came to understand three qualities of flight that had been unknown and unanalyzed—pitch, roll and yaw—and this enabled them to invent a way to give their Wright Flyer direction.

To control the nose-up or nose-down position and maintain level flight, the brothers built a small wing, or elevator, parallel to the larger lifting wing. The fan of tail feathers on a bird does this job, as does the horizontal tail of a modern airplane.

They also developed a way to bend or warp the outer edges of the wings. Such bending was needed to compensate for disproportionate airflow over the wings, which would result in the tilting of one wing up and the other down. A wing that tilts too far will lose lift, and the aircraft will become uncontrollable. Today, the Wrights’ system of warping through wires and pulleys has been replaced by the ailerons and flaps positioned along the rear surface of the wing.

After the brothers’ initial successes in 1903, Orville Wright wrote to a friend, remarking: “Isn’t it astonishing that all these secrets have been preserved for so many years just so that we could discover them!” They recognized, as scientists do today, that the universe is ruled by laws to which man must adhere. For most of us, it takes a rare moment of insight to bring us to such understanding.

“Isn’t it astonishing that all these secrets have been preserved for so many years just so that we could discover them!”

Now, so many years later, these aerodynamic qualities are well known by engineers, and it is difficult to imagine that they were ever a mystery at all. Still, it is rather a cold heart that can watch an airplane in flight and think merely of physics. Whether we glance upward to spy a tiny silver speck leaving a white contrail across the vast blue, or stand along the glide path of a major airport, seeming almost able to reach out and touch the 500,000 pounds of thundering 747 cruising in to a precise touchdown, the fascination with man’s ability to spin metal into flying machine remains.

It is an unfortunate reality, however, that there is a dark side to this wonder. Recent “shock and awe” campaigns may represent the latest in war administered from a militarized sky, but the fact is that one of the Wright brothers’ first customers was the military, which quickly incorporated the air into its battle plans. During times of warfare over the last century, the skies rained destruction, scattering one group or another under the howling wail of air-raid sirens.

In the post-9/11 world it is especially difficult to see commercial aircraft as symbols of goodwill. Even the SARS scare has shown how modern commercial aviation has interconnected the world to our possible detriment. Not only do we now fear the motives of passengers, we also fear the invisible microbes carried from continent to continent, city to city, population to population.

Thus, at the centennial of aviation, we see a mixture of good and evil, of wonder and anguish. It is frustratingly amazing that we can do such marvelous things with inanimate materials, yet be unable to restrict the application and use of our inventions to only that which is positive and helpful. We can train and concentrate our minds on great goals and aspirations, and in the next moment take one of our most incredible successes—giving man wings—and turn it against ourselves to hurt and destroy each other, whether intentionally or unintentionally. What have we missed?

It could perhaps be said today, “If God wanted mankind to have peace, He would have given him the means to achieve it.” Yet, just as there are laws of physics—laws that are constant and sure, working, abiding throughout history—so there are spiritual laws that govern our relationships with each other and with God. The Wright brothers learned how to discern and apply the basic laws of aerodynamics, laws that they acknowledged had been there all along. They did not invent them; nor could they be ignored. They are merely a description of the ways things move and are moved in the air. One either builds an aircraft to adhere to them or the aircraft does not fly. It is a simple equation that operates around the clock for every object in the air.

The laws of peace and well-being are as sure as any law of physics. They, too, have been there all along; we did not invent them, and we ignore them at our peril.

Similarly, God has given humanity the laws of peace and well-being, and they are as sure as any law of physics. They, too, have been there all along; we did not invent them, and we ignore them at our peril. While these laws remain ripe for discovery, they will not be found through intellectual practice or contemplation. As the apostle Paul wrote, these laws are not scientifically dissected; they are spiritually discerned and offer a window into the mind of God (1 Corinthians 2:11b).

To find them, one must do as the apostle Peter advised in the book of Acts (2:37–39): acknowledge that our own ways are not working, turn from those ways, and seek God’s help in discerning His better way of life. God has not left us without a source of understanding that would reveal how to rightly use the other physical knowledge He has given us power to gather. To become right-minded, to begin to apply our physical abilities in ways that are in accord with underlying spiritual principles and find deep satisfaction and peace in life is a situation Peter calls “times of refreshing” (Acts 3:19).

That spiritual insight, that moment of understanding, is something every human will one day experience. When we allow that understanding to turn us away from our own ways, which so often lead to a misuse of our abilities, toward adherence to the ways of true life, then we will begin to see the astonishing future of humankind. As Paul concluded, “Eye has not seen, nor ear heard, nor have entered into the heart of man the things which God has prepared for those who love Him” (1 Corinthians 2:9).

Humanity has gone far in building on the physical laws that the Wright brothers came to understand and apply. To the extent that we each discern and build on the spiritual laws that frame our existence, we will be able to successfully navigate this turbulent world and beyond.