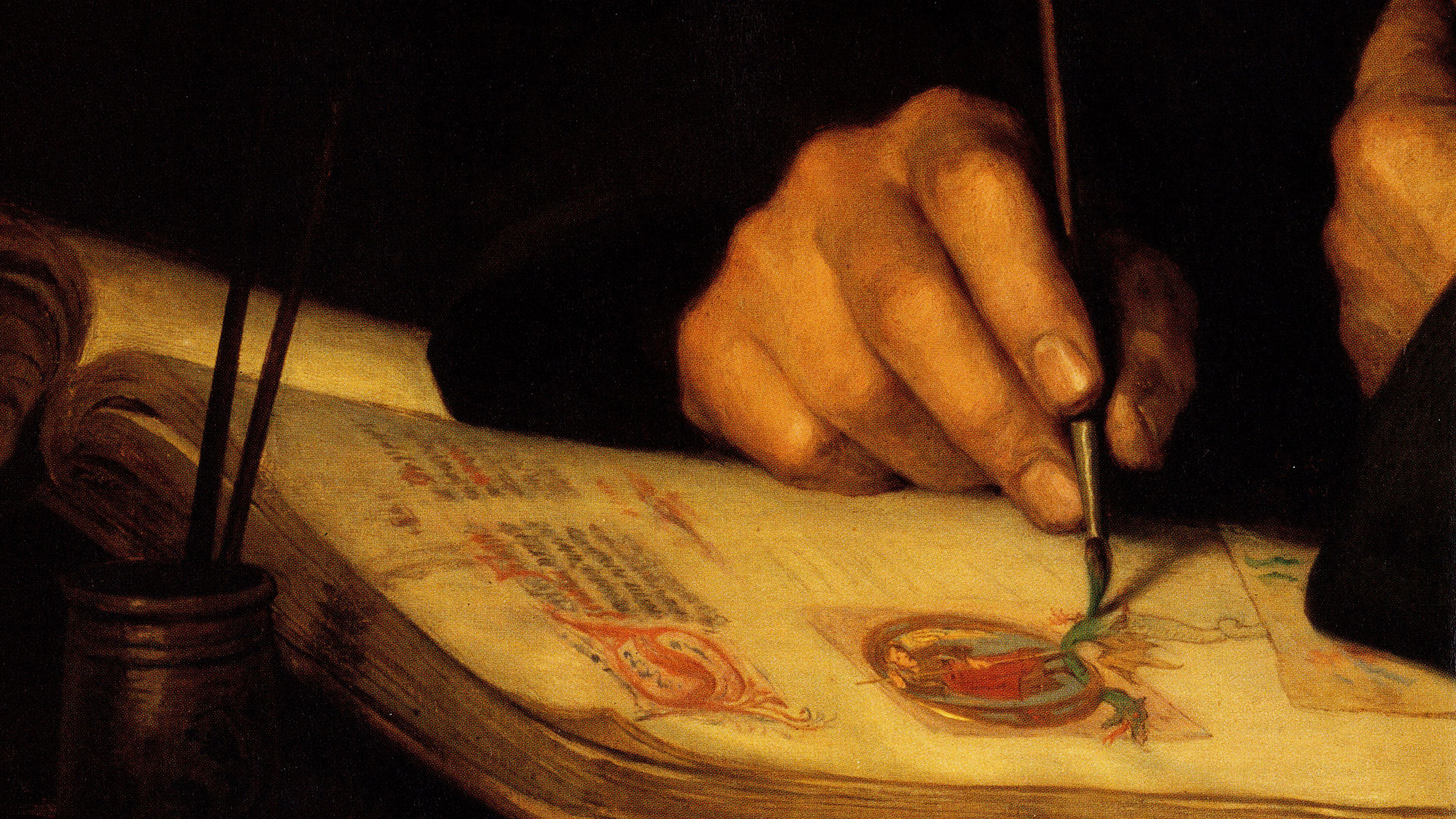 From the time the world’s one language was confused at Babel (Genesis 11:6–9), to this day when the Bible is available in whole or in part in hundreds of languages and dialects, the multilingual dissemination of the Word of God has had a long history.

The Bible tells us that God conversed with Adam and Eve in the Garden of Eden, but we have no way of knowing in which language they communicated. We do know that Moses recorded the event in the Hebrew tongue, and that for many centuries the expanding Old Testament continued to be conveyed in the language of the tribes of Israel, with just a few exceptions. For example, befitting the section’s content, Daniel 2:4b–7:28 was written in Aramaic, the language of the immediate gentile world at that time.

The dominance of Hebrew lasted among the Jews until the Mediterranean world adopted Greek as its lingua franca following the rule of Alexander and his successors. By the third century B.C.E., Jewish scholars at Alexandria began translating some of the Hebrew Scriptures into Greek. Subsequently, Jews wrote other religious texts—many of which appear in the Apocrypha—using either Hebrew, Aramaic or Greek. Ultimately several Greek translations of the Scriptures were undertaken.

While it seems likely that Jesus spoke in Hebrew or Aramaic to His disciples and audiences, at His crucifixion the Roman governor, Pontius Pilate, affixed a sign to the stake in Hebrew, Greek and Latin, for these were the commonly spoken or vernacular languages in the region. For all to see it read, “Jesus of Nazareth, the King of the Jews” (John 19:19).

Soon after Christ’s resurrection, the Holy Spirit was given to the disciples, and its coming was demonstrated in part by the worshippers at Jerusalem hearing a message in many languages. These Jews and proselytes had come from diverse areas of the Roman-dominated world and beyond, and they heard the good news of the Messiah’s coming in their own native tongues (Acts 2:5–11).

Not many years later, Paul was making use of his proficiency in various languages to speak to the Roman commander in Jerusalem in Greek, and moments later to the Jewish crowds in Hebrew (Acts 21:37–40).

When the time came for the New Testament texts to be conveyed to the wider world of the first century, they were initially preserved only in Greek. During the second century, they were translated into Old Latin and Syriac for the benefit of early Christians who lived in areas where those languages dominated.

Thus we see a pattern of various languages being used over the centuries to convey God’s Word in both Old and New Testaments as the circumstances warranted.

In the Medieval Vernacular

In this context, the adoption of English as today’s lingua franca and the development of the Bible in that language should not obscure the remarkable spread of the Bible and biblical texts in other tongues from the fourth century on.

It was then that the Roman Catholic monk Jerome (ca. 347–420) worked in Bethlehem on the translation of the Hebrew Scriptures into Latin, the vernacular of the Western Roman Empire. Criticized for relying more on Hebrew manuscripts than on the Greek Septuagint and earlier Old Latin versions, Jerome maintained that his translation was more in harmony with the original. His Latin “Vulgate” (from the Latin editio vulgata, or “common version”) became the definitive translation in Western Europe for almost a thousand years and heavily influenced both John Wycliffe’s and Martin Luther’s work, as well as the King James Version.

By the beginning of the fifth century there were whole or nearly whole translations of the Bible into at least nine languages.

But while Latin may have been the primary language of the empire, it was by no means universally spoken or read. By the beginning of the fifth century, therefore, there were whole or nearly whole translations of the Bible into at least nine languages.

Although Jerome translated mainly the Gospels and the Old Testament, from the mid-sixth century a complete Latin Bible was in use. The final version of the Vulgate included Jerome’s Old Testament and his revision of the Gospels, along with a previous Latin translation of the other New Testament books. The Vulgate was so successful that by the seventh century, Latin was the language the church at Rome favored. Despite this official position, however, vernacular versions continued to be produced, primarily for liturgical use.

In England, Old English (Anglo-Saxon) became the vernacular during the early Middle Ages. It is said that it was so different from the English of the 1300s onward as to constitute a foreign language. From the 600s until the 11th century, several men contributed to the process of translation: Caedmon, Aldhelm, Egbert, Bede, Alfred, Aldred and Aelfric translated various biblical texts into Old English and its dialects.

With the coming of the Normans (Scandinavian and Danish Northmen or Norsemen) from France in 1066, Middle English developed, and translation into regional dialects continued. In the period just before the reformer John Wycliffe came on the scene, biblical texts were produced in the Southern English, West Midlands and Northern English dialects.

During the medieval period, translations were also pursued by other peoples. In the ninth century the Catholic missionaries Cyril and Methodius, who came from Thessalonica, used what became known as Old Church Slavonic to translate the Bible for the Moravian Slavs. Though modern Slavic languages have changed, these old Slavonic manuscripts of the Gospels, the Psalter, and other portions of the Bible are still found in Bohemian, Bulgarian, Croatian, Macedonian, Russian and Slovenian versions. The work of Cyril and Methodius influenced the Czech reformer John Hus (ca. 1369–1415), a disciple of Wycliffe. Hus used the Bohemian manuscripts to produce a revised translation of the whole Bible in Old Church Slavonic.

Once mass printing had become a reality, European-language versions began to proliferate. At least 14 printed editions of the whole Bible in Middle High German and at least three in Low German and Dutch came into circulation between approximately 1466 and 1526. The Old Testament in Dutch was available by 1477, and French and Italian were also among the earliest printed versions.

Meanwhile, a rebirth of interest in the classical world and its artistic and literary accomplishments had followed the fall of Constantinople in 1453. The consequent renaissance in the study of the original languages of the Bible produced very helpful aids to translation.

In 1516 Erasmus’s parallel Greek and Latin New Testament, Novum Instrumentum, was published and ran to numerous editions. This was the basis of translations into Dutch, German and English. From the Spanish university at Alcalá de Henares (Complutum in Latin) came a remarkable six-volume Bible keying in the Hebrew, Latin and Greek in parallel columns. It also contained numerous study aids. Six hundred copies of this Complutensian Polyglot were circulated in 1522.

As scholar Basil Hall puts it: “There was a preparatio evangelica in the first quarter of the sixteenth century, for it was then, and not before, that there appeared in combination the achievements of the humanist scholar-printers; the fruits of intensive study in grammar and syntax of the three languages; and the energy provided by the economic development and regional patriotism of the cities where bonae litterae flourished—Basle, Wittenberg, Zurich, Paris, Strassburg, Geneva” (The Cambridge History of the Bible, vol. 3).

By the time Luther used Erasmus’s parallel translation for his German New Testament (1522) and completed his German Old Testament (1534), other European-language versions were widespread. But the influence of Luther’s vigorous, popular style on German literature proved to be profound, and this alone, perhaps, accounts for the relative lack of other German translations to this day. Rather like Tyndale and, subsequently, Shakespeare, Luther left his mark on his mother tongue.

Once the British began their rise to imperial power, missionaries availed themselves of the opportunity to attempt to convert foreign lands, traveling far and wide. In India, in the first part of the 19th century, English Baptist William Carey and his colleagues translated the Bible—in part or whole—into more than 40 languages and dialects. In 35 of these they were reportedly the first to print Scripture. Amazingly, they accomplished this in the short space of about 30 years. To perform the task, Carey taught himself Latin, Greek, Hebrew, French, Dutch, Sanskrit, Bengali, Marathi, Sinhalese and other languages.

Today the Bible is found either complete or in part in more than 2,300 languages and dialects, and every year 30 million copies are distributed.

Today the Bible is found either complete or in part in more than 2,300 languages and dialects, and every year 30 million copies are distributed. Without doubt it is the most available, most translated and yet most misunderstood book. For even in our own vernacular, it is a book that requires an open mind and a repentant spirit before its wisdom is unlocked.