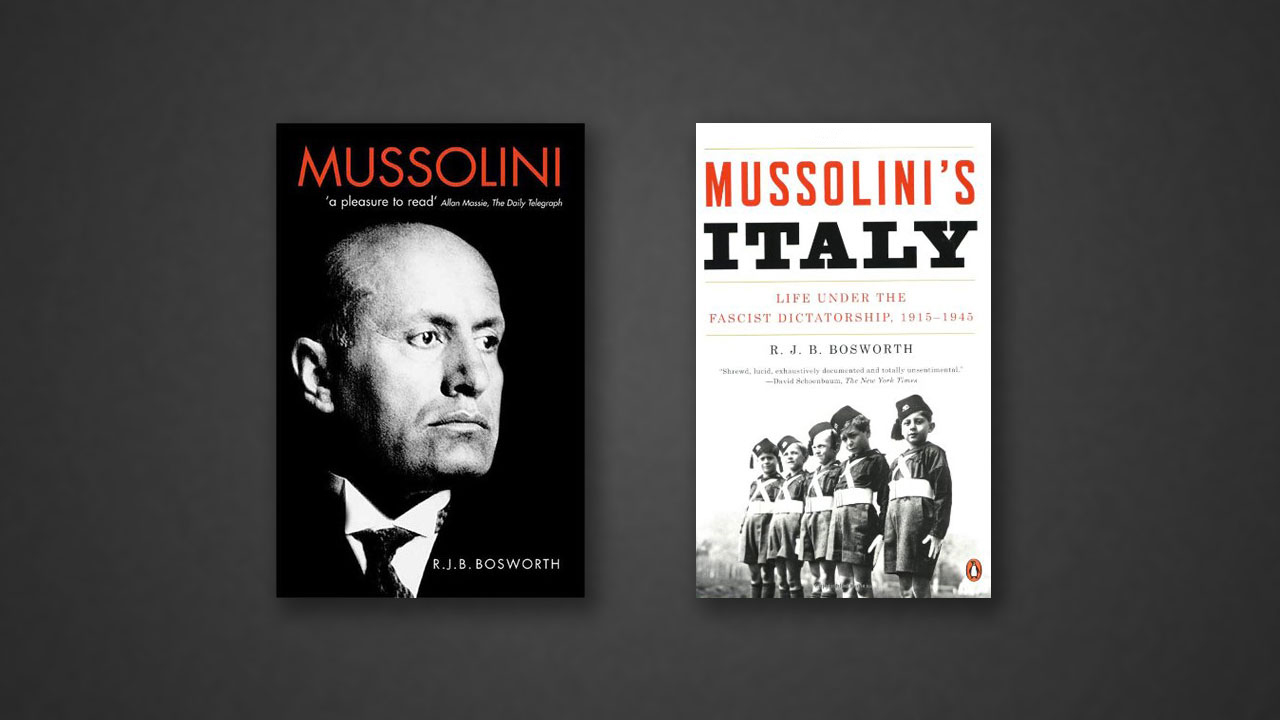 Are biographies of leaders the assured way to understand the history they inhabit? Can 20th-century Italy, Germany, the Soviet Union and China be best explained through the actions of Mussolini, Hitler, Stalin and Mao? Is the so-called “Great Man” theory of history the best way to explain the tides of national life, or does it fail precisely because it is one-dimensional?

R.J.B. Bosworth, an authority on modern Italian history, faced the essence of these questions in a review of his 2002 book, Mussolini. His reviewer suggested that only by studying the Italian social system of which Benito Mussolini was a part could the answer to the terrible events he influenced and/or unleashed be grasped. While Bosworth thought he had given sufficient evidence of society’s role in the leader’s rise to power, and in his support once there, he accepted the challenge to spell out “the life of the small towns and cities and the thousands of local institutions and associations of provincial Italy to understand why so many Italians’ accepted the ‘Italian dictatorship.’” The result is his most recent book, Mussolini’s Italy.

Mussolini was recognized immediately as an important work, the best recent biography about one of the main figures in the 20th century’s Age of Dictators. Bosworth made it clear from the start that his approach would be to consider questions raised in a parallel work on Hitler by the British historian Ian Kershaw. Kershaw had framed his two-volume masterpiece with a statement made by a lower-level party functionary in interwar Germany, to the effect that without waiting for further instruction, people should “work towards the Führer along the lines he would wish.” This comment succinctly expressed for Kershaw the societal dynamic of Hitler’s power: people willing to work toward what they perceived the leader wanted, thus not only recognizing but extending his authority. In his biography, Bosworth asked whether the same state of mind was true of Mussolini’s followers.

His conclusion was that, while the Italian dictator was certainly no Hitler, his rule was the result of a relationship forged between the fascist leader and his public. But Bosworth characterizes that relationship as the obverse of Hitler’s: here was a dictator, certainly vain, pompous and cruel, but who more often than not worked toward his people. “He tried to be popular and accommodating” and was both “a charismatic Fascist dictator and a trimming and cynical politician.” But though he was not the equal of his ally, the driven, racist and genocidal Hitler, it should not be forgotten that Mussolini was responsible for the deaths of an estimated one million people during his rule.

Bosworth makes it clear that sympathy for the man is not his goal: fascism was a bad idea and Mussolini was a bad man. In the end, Mussolini’s legacy is not ideological—his fascist ideas are largely forgotten. But the Duce certainly provided the model for the current political sine qua non, “spin.” Not unlike others today who are of quite different political persuasions, Mussolini enjoyed the propaganda created about his charisma and eagerly participated in the mythmaking.

But how did the Italian people react to the Duce who worked toward them? In Mussolini’s Italy, Bosworth takes us on a tour of Italian life at home and abroad, across political, social and gender boundaries. He is interested not so much in the Duce per se but in his immediate political cronies and the people the leader supposedly led. For, as he makes clear in Mussolini, the Duce was a dictator who did not do much dictating but spent his days being swept along by destiny and trying not to appear a failure.

In Mussolini’s Italy, the leader has only one chapter devoted to him. The rest is an account of “what the Fascists said they were doing, what they were actually doing and how the Italian people, in their class, gender, age, regional, religious, urban, rural and other diversities, coped with this dictatorship’s version of totalitarianism.” The underlying structural integrity of these various “Italies” was a reality that made Mussolini’s totalitarianism not so total and renders the story a nuanced one. Bosworth’s conclusion, which he is sure will upset some who explore the history of ideas, is that “on every occasion when the Fascist ‘revolution’ sought to manipulate and control Italians, Italians were hard at work manipulating and adapting Fascism. Like all modern and most ancient ideologies, Fascism talked as though it wanted to impose only one version of history on its people. In reality, however, Italians at the interstices where ideology and practice met clung stubbornly to many pasts and presents and vested their hopes in many futures.”

“On every occasion when the Fascist ‘revolution’ sought to manipulate and control Italians, Italians were hard at work manipulating and adapting Fascism.”

Italy survived Mussolini, but in his time he inspired and encouraged several other totalitarian movements. As a result, he was pleased to partner with the 20th century’s and perhaps history’s most destructive force, Adolf Hitler. It was an alliance that brought the Duce’s death at the hands of a firing squad of Italian partisans, one of those “Italies” he could no longer spin.

Taken together, Bosworth’s two lengthy volumes present an extremely well-rounded analysis of a terrible period in recent history, from which we must all learn the lessons. Totalitarians come in various forms and with diverse messages. History may not repeat itself, but as Mark Twain said, “it rhymes.”